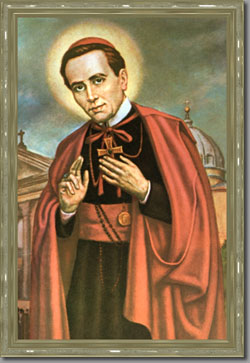 On this feast of Saint John Neumann, (Oct. 1811-Jan. 1860) let us remember all who have come before us and strove in their lifetime to carry out the will of the Lord regardless of the difficult hardships or obstacles they faced. John Neumann was one of these men. He was studying in the seminary and was ready to be ordained in 1835 when the bishop declared that there would be no more ordinations due to the abundance of priests in his native homeland of Bohemia.

Not to be discouraged, he petitioned bishops from all over Europe, but had no luck in fulfilling his vocation. After learning English he wrote to bishops in America and finally was able to travel to New York to become an ordained priest.

He was a favorite among the immigrants due to his ability to learn languages. He was fluent in at least six different languages. As he was able to speak with so many different people he realized that many parents were concerned with the Protestant influence on their children if they were to send them to the schools of that time, so he organized the first Catholic school system to address these concerns.

Throughout his entire life and service to the Lord, he never lost his love for the people, especially the poor. He was a very humble man who lived a life of poverty and gave everything he had to the poor. Even as he was serving as bishop of Philadelphia he owned only one pair of boots! He was canonized in 1977 and is the patron saint of Catholic education.

When reading about Saint John Neumann, I am struck by the humbleness he showed and continued to allow to guide him, even when he was serving as bishop of Philadelphia. Nowadays we tend to want to remove ourselves from poverty, we act as if our poverty is a sign of our sinfulness...rather than embracing it as a way of sanctification. We often profess and pray for a humble heart, but so much of the time,we do so from the comfort of our living rooms….sipping on freshly brewed coffee…filling our bodies with tasty foods…adjusting the air conditioning to suite us. We seldom stop and spend time with those who are living in poverty…those families struggling day to day….those who suffer on the streets….alone…those in the hospitals...(there is suffering everywhere)…so let us pray for the intersession of Saint John Neumann that we may spend some time today….sharing a genuine moment of Catholic education, by teaching  the world (at least our little bit of it....) what it truly means to be living an authentic catholic life…by being humble in our actions and in our words….and by loving the Lord with all of our everything…and embracing our own poverty, which is all we have left, when we return to Him all that he has given us…Amen.

Saint John Neumann, pray for us.