The Evil Nature of Abortion 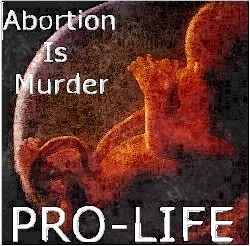 Today marks the 44th year that abortion has been legal in our country, allowing the killing of over 59 million babies since 1973. Most(93%) of these abortions are done as a convenience for the parents. Every day in America, abortion kills more Americans than were killed on 9/11. Every year, abortion kills more Americans than were killed in all the battlefields of all the wars in the history of the United States. This is an atrocity that cries out to the Lord. It is a crime against all of humanity.

Abortion is being ‘sold’ to our women, as a right. It is a lie, that is cleverly  wrapped in words that make women feel empowered, when in fact the very nature of legalizing abortion was a means to control women and their ability to conceive and bear children. This is especially true with regards to minorities. In 1922, Margaret Sanger, who is the founder of Planned Parenthood, wrote in her book ‘Woman, Morality and Birth Control’ that  “Birth control must lead ultimately, to a cleaner race.”  Today in America, roughly 52% of all African-American pregnancies end in abortion. I ask you, how can a society that is convinced that it must kill its own, be free? Abortion is a means of controlling a population, it is a means of controlling the women of that population.

Pro- abortion advocates can often be heard touting the fact that it is a right of a woman to control her body and that no one should infringe upon that right. Yet, so many of these young women, when faced with crisis pregnancies, are having their rights as a living child of God, trampled on, by these very same advocates. And they are being  encouraged to kill their child; thus giving up their parental rights, as well as the right to life, of their unborn child, all for a society that cares for neither.

Regardless of how often we are told that good is evil and that evil is good; it is still a lie; created by the father of all lies, Satan. The devil is clever, he uses our pride and our arrogance to control us…to deceive us into killing our young and most innocent. In believing his lies, we become enslaved to him. We are putting our souls in bondage. Many who abort their child, become so ensnared in the lies of abortion, that they are no longer  free. Abortion is a trap. We murder our young, and in order to justify the nagging feelings we are left with, we start touting the same lies that were used on us….thus becoming enslaved to the very beast that ensnared us… entangled our souls in the flames of hell. This is not a way to live. And the devil knows this. Abortion is not a right. It is a wrong. When the abortion mentality takes hold of a society it destroys the family. And societies that allow this evil, are never free. In fact, all ancient societies that freely killed their children have failed; Egypt, Greece, Rome and the Aztecs to name a few.

But unlike these past civilizations which worshiped gods carved out of stone or wood, America was founded on the truth that Jesus brought into the world. It was founded as a Christian nation with a God and a religious code that included morals that helped shape the way we governed. But as our nation fell away from God, the  laws changed, and allowed such heinous acts as abortion to become legal; showing how far we have fallen away from the moral code that once guided us. We are now unable to differentiate the truth from the lies….the same lies that enslave us and keep us from becoming the true people we are meant to be, and the same lies that keep us killing our unborn, thus keeping them from being who they were created to be.

So as we pray for our nation on this day that abortion became a legalized law of our land, let us ask the saints in heaven and the Blessed Mother for their  intercession in  aiding  in the conversion of those who are most at risk from procuring an abortion; those pregnant women who feel abandoned and alone. Let us also continue to pray for the conversion of all those who work to provide these abortions, that they may start realizing the true evil that abortion really is. And let us pray for the courage to actively work to promote a culture of life in a world so preoccupied with death.

Dear Lord,  First,we thank you for all things You have given us and ask for your guidance in our actions. We ask for conversion of women who are pregnant and considering  abortion. Please help them to recognize the person-hood of the child they are carrying. We also pray for those who work to perform these abortions, that You may touch their hearts and help them to recognize the evil that abortion truly is.  We ask You Dear Lord, to give us the grace and strength we need to be beacons of truth in the darkness surrounding abortion. And finally Dear Lord, we pray for our country that we may once again be a country that protects all human life from conception until its natural end. Amen.

Like Loading...
This entry was posted in Some thoughts and tagged 44th year of legalized abortion, 52% of all African-A merican pregnancies end in abortion, abortion is murder, Before I formed you in the womb..., Evil nature of abortion, Margaret Sanger, Planned Parenthood. Bookmark the permalink.