St. John Bosco – Father and Teacher of the Youth – January 31

It has been said that God will send saints to the world when they are needed most. Not just holy men and women, but saints with a specific desire in their heart to serve a particular will of God. Saint John Bosco was one such saint. He was born in 1865 in a small scrubby cottage on the hills of Becchi at the foot of the Italian Alps. While still a young child has father passed away leaving his mother to care for and raise three sons on her own.  She was a kind woman of good character and tenderness. She taught her sons to work hard on their farm, but treated each with tenderness, not in a coddling way but with the firm love of a godly mother. She wanted to raise strong men who loved and feared the Lord.

While still a boy, John felt his calling to the priesthood, and once told his mother that he was going to be a priest and that he would devote his time to caring for boys. He knew that most boys his age were really good boys, but that they did not have the benefit of such a mother as he had, and he wanted to make sure that boys all over knew they had a Father and Mother in heaven who loved them. In 1841 he was ordained to the priesthood in Turin. He was a very gifted man and often had dreams of a beautiful woman( the Blessed Mother!) who would show him what God desired of him. He knew that he was to work with the youth and seeing so many of these young boys suffering from poverty on the streets in Turin he created what came to be called ‘The Oratory’. He would meet with a large group of boys in different places throughout the city. They would pray the rosary and he would teach them about the faith. They also played. He felt it necessary to allow the youngsters to have a hard play so as their minds and hearts would be open to God.

There really is so much that Saint John Bosco did for the youth during his life. He opened an orphanage, a trade school and he developed a system of teaching which he called “preventive system.” Which is a means of teaching a young boy in a way that prevents him from becoming bad. It is based on Christian charity, with a double foundation of reason and religion.With Our Lady’s guidance he even developed  a religious order, the Salesians. Saint John Bosco accomplished much during his life.He did whatever the Blessed Mother asked of him, and worked tirelessly until his death in January 1888. He never stopped working for the Lord. He once said “I have been an instrument in the hands of Mary. She has done everything. Had I been a worthier instrument, I would have accomplished a great  deal more.” What an awesome saint for us today, when we tire so quickly and get so distracted from  our vocational work for the Lord. Reading about St. John Bosco, I realized how soft I have become in  my zeal for the Lord and this wonderful Faith. It would be a good practice for each of us who desire to one day stand at the gates of Heaven, to ask for this humble saint’s intercession in our day to day works for the Lord. 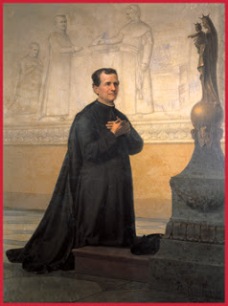 Saint John Bosco, Apostle of Youth,
Friend of the destitute,
Teacher in the ways of God,
Your dedication to empowering the needy,
and enlightening the ignorant inspires us still.
Help me to work for a better world,
where the young are given the chance to flourish,
where the poor’s dream for justice can come true,
and where God’s compassion is shown to be real.
Intercede for me as I bring my needs to you and to
Our heavenly Mother, the Help of Christians. Amen.

O God, who raised up the Priest Saint John Bosco as a father and teacher of the young, grant we pray, that, aflame with the same fire of love, we may seek out souls and serve you alone. We ask this through our Lord Jesus Christ, your Son, who lives and reigns with you and the Holy Spirit, one God, for ever and ever. Amen.