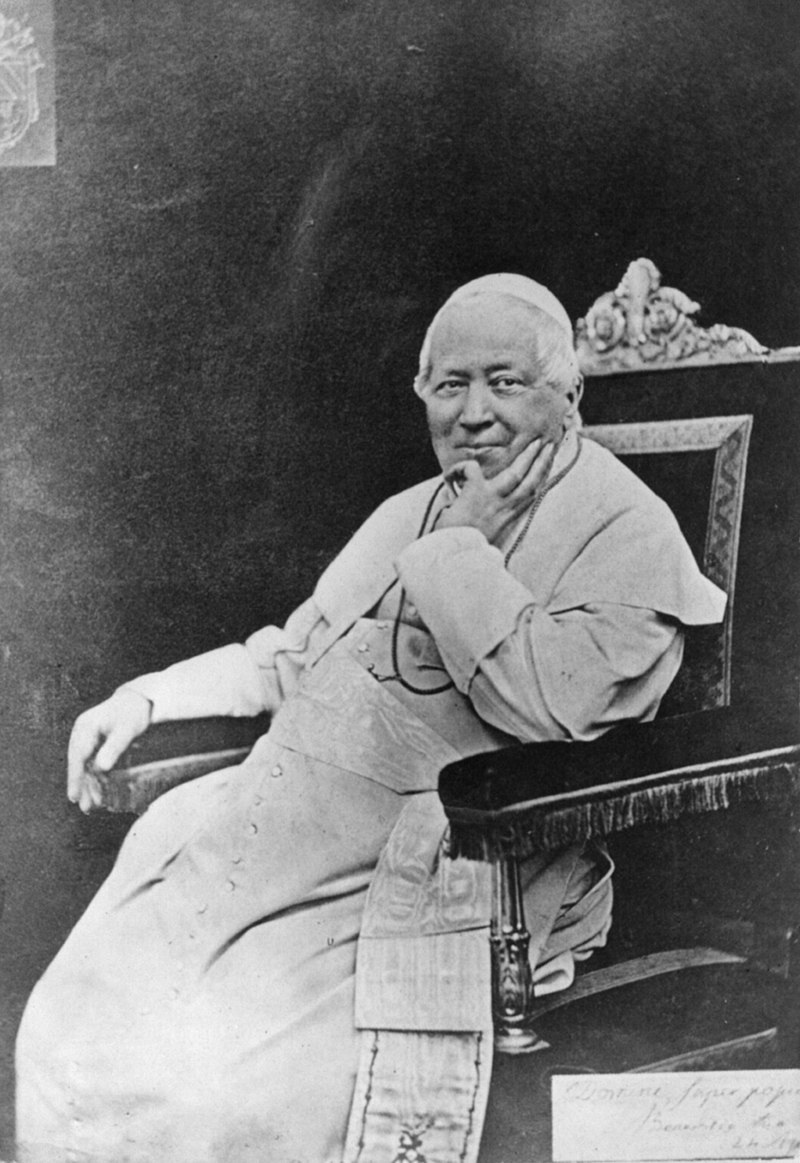 Blessed Pope Pius IX was born Giovanni Mastai- Ferretti on May 13, 1792. During his studies at the College of Noblemen in Volterra he suffered from boughts of epilepsy, then in 1815 he received the grace of a full recovery at Loreto. He was ordained a priest in 1819, and when he was 35 he was appointed Archbishop of Spoleto. He was created a cardinal by Pope Gregory XVI, and then chosen as the 255th pope in the conclave of 1846. He served as pope until his death in 1878. He served as pope for 32 years, with only Saint Peter the Apostle serving longer.

Pope Pius was a very holy man who had an unconditional love for the Holy Mother Church.Thoroughly aware of his role as the “Vicar of Christ” and responsible for the rights of God and of the Church, he was clear, simple and consistent. He combined firmness and understanding, openness and fidelity.

He was very generous and served with a Christian heart. He loved the Church and in his first encyclical he condemned freemasonry and communism. On December 8, 1854 he defined the dogma of the Immaculate Conception and blessed the rebuilt St. Paul’s Basilica, which had been destroyed by fire in 1823.

Pope Pius Defined the Dogma of the Immaculate Conception in 1854

Pope Pius IX was a man of prayer. He did not believe in the separation of  the ‘church and state’, he felt that man should serve God at all times, that a man’s life should not be compartmentalized into a work life and a separate prayer life. He felt that prayer was a way of life and should govern man in all moments of his life. As an example to many, he constantly prayed. He had a great devotion to the Blessed Sacrament and started the Forty Hours Devotion.  He was known to celebrated a first Mass, and then in Thanksgiving for the first Mass, hear a second Mass. He spent long hours in front of the Blessed Sacrament in holy prayer.

There are many miracles surrounding Pope Pius IX. He was healed of epilepsy as a teen by The Virgin of Loreto. But one of the most interesting miracles is concerning an apparition of the Blessed Mother to Mother Mary Mariana.

On December 8, 1634, the feast of the Immaculate Conception, three archangels and their Queen appeared to Mother Mariana. St. Gabriel was carrying a Ciborium filled with Hosts which The Blessed Virgin Mary explained:

“This signifies the Most August Sacrament of the Eucharist, which will be distributed by my Catholic priests to faithful Christians belonging to the Holy Roman, Catholic and Apostolic Church, whose visible head is the Pope, the King of Christianity. His pontifical infallibility will be declared a dogma of the Faith by the same Pope chosen to proclaim the dogma of the Mystery of My Immaculate Conception. He will be persecuted and imprisoned in the Vatican by the unjust usurpation of the Pontifical States through the iniquity, envy and avarice of an earthly monarch.“ To this day there are many who would try to detract from this very Holy Pope, precisely for the fact that he fought against liberalism and modernism within the Holy Mother Church. He also fought against freemasonry and realized that their plan was to ultimately destroy the Church from within. He saw first hand the destruction that atheism and communism brought with it, and he worked tirelessly to fight against the evils of the world. At one time having to flee as it was feared that he was to be the target of an assassination attempt.

There really is so much more to this Holy Pope, and it would benefit your soul if you could find an honest biography of this blessed servant of God. One final  note,his body was recently exhumed, was found miraculously preserved in the tomb where it had lain for more than a century. His face still showed a striking serenity in death. “The most Blessed Virgin Mary, in the first instant of her conception, by a singular grace and privilege granted by almighty God, in view of the merits of Jesus Christ, the savior of the human race, was preserved free from all stain of original sin.” – Pope Pius IX