Feast of Saint Joseph – March 20- Patron of the Universal Church

Since the 19th fell on a Sunday this year, the Feast of St. Joseph was transferred to the 20th of March. Because of the very special nature of  St. Joseph in the life of Jesus, the Holy Mother Church chooses to recognize him with two unique Feast days. The first of which celebrates his marriage to the Blessed Mother and his role as foster-father to Jesus. It is a celebration of his royalty…his lineage that was passed on to his adopted son Jesus…creating a supernatural bond that extended to heaven. St. Peter Julian Eymard wrote:

“Therefore, since Christ was King, of the line of David, He made Saint Joseph to be born of this same royal line. He wanted him to be noble, of earthly nobility. In the veins of St. Joseph, therefore, flows the blood of David and Solomon, and of all the noble kings of Judah. If his dynasty still sat on the throne, St. Joseph would be the heir and would have sat on the throne in his turn.”

It is through this lineage of Joseph and Mary, both of whom were of the house of David, that Jesus’s genealogical line was locked forever; and by His passion and death, His Kingship was secured for eternity.

Today’s feast day was fixed in Church in the 15th century and extended to the whole Catholic Church by Pope Gregory XV in 1621. It is also observed as the memorial of his death. The second feast in which we celebrate St. Joseph is the 1st of May which celebrates his humility and obedience as a worker, it is referred to as The Feast of St. Joseph, the Worker and was created by Pope Pious XII in 1955. The date was chosen as it coincided with ‘Labor Day’ celebrations throughout many countries.

As faithful Catholics, we should looking to Saint Joseph’s example of how to properly fulfill one’s vocation. As husband to the Blessed Mother and as foster-father to Jesus, he is a prime example of faithfulness and more importantly, love. From what we read in the Gospels, Joseph is a just man, with a willingness to do whatever the Lord asked… No matter how uncertain he felt about any given situation…He gave himself completely  to the Lord... His whole life was an expression of love… 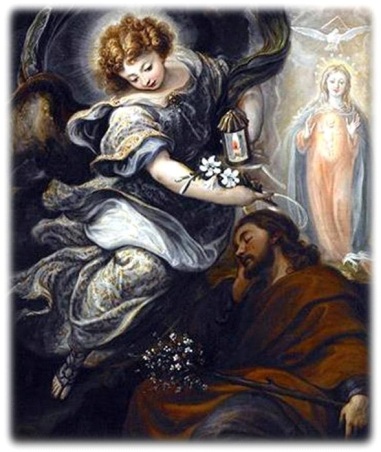 We read in the Gospels that when St. Joseph finds that Mary is pregnant, just before they are to be married, he is reluctant to marry her, but he does not know what to do…All he knows for certain, is that he does not want to bring scandal to Mary…He does not want to hurt her…or cause her shame. That night while he is sleeping, an angel appears to him in a dream and tells him:

“Joseph son of David, do not be afraid to take Mary home as your wife, because what is conceived in her is from the Holy Spirit. 21 She will give birth to a son, and you are to give him the name Jesus, because he will save his people from their sins.” (Matthew 1: 20-21)

This is Joseph’s first encounter with an angel…He listens… and he obeys. He takes the the Virgin Mary into his home as his wife. Before they can even settle in, he has  another visit from the angel telling him to take Mary who is now swollen with the Baby Jesus and travel to Bethlehem, which he does…obediently. Then shortly after the birth of Jesus, the midnight hours of darkness have surrounded him once again… and he has another visit with an angel of the Lord, appearing to Joseph in a dream, the angels says:

“Rise, take the child and his mother, and flee to Egypt, and remain there until I tell you, for Herod is about to search for the child, to destroy him.”(Matthew 2:13) 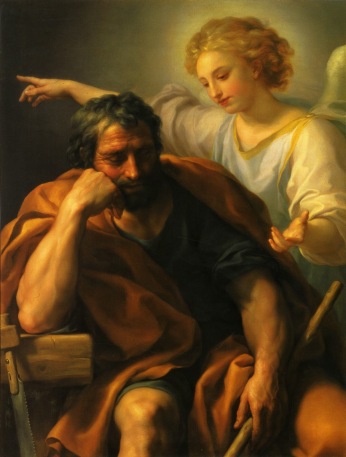 Matthew 2:13-15
And after they were departed, behold an angel of the Lord appeared in sleep to Joseph, saying: Arise, and take the child and his mother, and fly into Egypt: and be there until I shall tell thee. For it will come to pass that Herod will seek the child to destroy him. Who arose, and took the child and his mother by night, and retired into Egypt: and he was there until the death of Herod: That it might be fulfilled which the Lord spoke by the prophet, saying: Out of Egypt have I called my son.

He does not question these messages of the angel…He does not hesitate in his obligation to the Lord….in his obligation… to protect Mary and the Child Jesus. And so, he flees  with his Virgin Bride…and his Child…to safety. From that point onward all we know of Joseph is that he was a hard worker who humbly fulfilled the tasks presented him in his vocation as husband and father. He was faithful in the care of his family. He loved and supported the Blessed Virgin and helped to raise the Child Jesus in a home dominated by love and quiet obedience to the religious laws prescribed at that time. 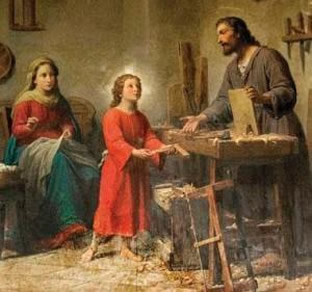 In his 1889 encyclical, Pope Leo XIII speaks of Saint Joseph as an “exemplary model of kindness and humility.” He also goes on to explain that St. Joseph, by allowing the Holy Spirit to fill him, was able to possess and develop the virtues needed to participate in Mary’s sublime dignity. Though Mary and Joseph shared a close bond, their union was a chaste one, allowing them to offer their purity…their virginity…as a golden crown to the Lord.

We know that Joseph was a righteous and just man according to the Gospel narrative, but we also know this because God chose him to be Jesus’ earthly father. Joseph was chosen from among all men to become the spouse of the most Pure and Holy Virgin Mary, do we not suppose that he would have to be a reflection of supreme holiness himself??   Just as the Lord chose a most pure tabernacle for His Son, in the womb of the Virgin Mother, would He not also choose a father for His Son that was most pure and holy as well?

Not only do we have the Gospels to learn about St. Joseph’s noble character, if we listen to other saints who have had encounters with the Blessed Mother, we find that the Virgin Mary wishes to share his attributes with us as well. In a vision, Saint Bridget of Sweden, was told by the Virgin Mary :

“St. Joseph was so reserved and careful in his speech that not one word ever issued from his mouth that was not good and holy, nor did he ever indulge in unnecessary or less than charitable conversation. He was most patient and diligent in bearing fatigue; he practiced extreme poverty; he was most meek in bearing injuries; he was strong and constant against my enemies; he was the faithful witness of the wonders of Heaven, being dead to the flesh and the world, living only for God and for Heavenly goods, which were the only things he desired. He was perfectly conformed to the Divine Will and so resigned to the dispositions of Heaven that he ever repeated “May the Will of God ever be done in me!” He rarely spoke with men, but continually with God, whose Will he desired to perform. Wherefore, he now enjoys great glory in Heaven.”

Saint Joseph was created with purity of speech and the grand humility that was needed to undertake the formidable task of responding to God! Whenever I hear people speak of Saint Joseph in a way that demeans his special role in the life of Christ…in the life of the Church, it really makes me sad that this wonderfully holy and just man, does not get the special recognition he deserves. Just imagine… St. Joseph was a man with sufficient wisdom and purity… chosen to rule over the Virgin Mary and the Child Jesus…(to rule over God Himself!)  And only when we can imagine this, will we be able to understand…will we be able to comprehend… the sublime virtue of Holy Saint Joseph! Dear St. Joseph, patron of the Holy Catholic Church, pray for us!

To thee, O Blessed Joseph, we have recourse in our tribulations, and while imploring the aid of thy most holy Spouse, we confidently invoke thy patronage also. By that love which united thee to the Immaculate Virgin, Mother of God, and by the fatherly affection with which thou didst embrace the Infant Jesus, we humbly beseech thee graciously to regard the inheritance which Jesus Christ purchased with His Blood and to help us in our necessities, by thy powerful intercession.

Protect, O most provident Guardian of the Holy Family, the chosen children of Jesus Christ; ward off from us, O most loving Father, all taint of error and corruption; graciously assist us from Heaven, O most power protector, in our struggle with the powers of darkness; and as thou didst once rescue the Child Jesus from imminent peril to His life, so now defend the Holy Church of God from the snares of her enemies and from all adversity.

Shield each one of us with thy unceasing patronage that, imitating thy example and sported by thy aid, we may be enabled to live a good life, die a holy death, and secure everlasting happiness in Heaven. Amen.

Like Loading...
This entry was posted in Patron Saints and tagged Saint Joseph, Universal Church. Bookmark the permalink.