In the history of the world we have found that wherever there are men who despise the One True Faith and the Truth that came from Jesus,  we will also find men and women with hearts and mind’s filled with a determination to defend this same Truth. And because of their willingness to lay down their lives…God will pour His mercy and His Grace upon them, so that they can stand firm in the face of such atrocious measures… One such ruler who despised Christianity was Marcus Aurelius of Rome. As we read yesterday, he was responsible for the scourging and death of St. Justin. Today we will discover just how cruel and barbaric he actually was to the men and women of God.

Considering the turmoil that is going on throughout the world, it would be wise for us, as practicing Catholics…as Christians… to learn about these Holy Saints…to unite ourselves to them spiritually…for we do not know what our own future holds....As we experience an influx of Muslims in our own country and watch in horror at all the terrorism that is being perpetrated over seas in Europe, we would be wise to prepare ourselves for the similar fate of Christians, who stood firm and refused to deny the Lord. We should be praying every day that God will give us His Mercy and Grace so that we too may stand firm as did these saints, we are about to read about. There is no better glory for the Lord than to lay down your life for Him…for the Truth…so let’s begin...

The year was 177, and Christians were suffering throughout the various parts of the empire which was being ruled by Marcus Aurelius. But none suffered more than the martyrs of Lyons and Vienne, which was in the south of France, known then as Gaul. There was a company of Christian missionaries from Asia Minor, who had settled there with a bishop named Pothinus. At first it was just angry mobs of heathens insulting the Christians when they faced each other on the streets. Then when that wasn’t enough, the heathens began throwing stones and rocks and hurtling objects at the Christians…finally the anger of the heathens escalated and they began breaking into the Christian’s homes and destroying their property. It got so bad that the government became involved….and of course…they sided with the heathens.

The Christians were rounded up and thrown into horrid dungeons and imprisoned. Many of them died due to lack of care…many starved or became sick from the unhealthy conditions. By this time their bishop, Ponthinus who was ninety years old and very ill, was taken before the governor, and asked, “Who is the God of Christians?”  from the way the governor spoke, Ponthinus knew the feeling of the governor was already set against him, so he answered, “If thou be worthy, thou shall know.” This outraged the governor, and even though the bishop was ninety years old and very feeble, he was tied and dragged about the streets by the soldiers. The angry mob followed behind and kicked and hit the old man with whatever they could find. When this torture was finished, the soldiers threw the bishop into the dungeon where he died two days later.

The other prisoners were tortured together for six days, in a variety of horrific ways, to inflict unusual amounts of pain and suffering upon the Christians. One such means of torture was pressing hot iron plates against their skin. The heathens went so far as to build a chair out of iron and heat it until it was glowing red, then they would force the Christians to sit upon the blazing iron. But the Good grace of God was upon these Christians, because whatever the heathens could think up, the Christians would endure with a firmness that gave courage to other Christians.

One of the most heroic martyrs of the day was a fifteen year old boy, who was taken every day to witness the tortures that were being committed upon his fellow Christians in hope that he might be frightened into denying his Savior…but it did not work… and on the final day, he was cruelly put to death.

Another of the greatest cruelties of this time was the assault that was perpetrated against a young woman named Blandina, who was a slave to a Christian woman. Now, usually, the heathens would treat the slaves with more kindness than they would the actual Christians, but because Blandina herself was a Christian, clothed with God’s holy graces...it was an all out assault against her. First, they threw her to the wild beasts. But the wild animals refused to touch her, instead they lay meekly around her feet. Outraged, the heathens threw her back into the prison until they could devise another plan. The only thing Blandina would say during the whole ordeal was: “I am a Christian and nothing wrong is done among us.” 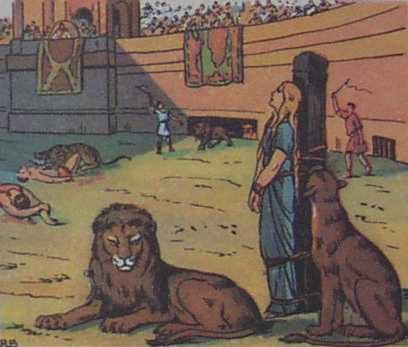 Finally, after several attempts to get her to denounce her Christian Faith, with whips and the burning iron chair, they threw her into an arena with a wild bull who tossed her body around like she was a rag doll. And even though her physical body was killed, she never cried a complaint or showed any fear…which of course angered the crowds…again… and they burnt her body and crushed her bones, mocking the Words of the Bible which speak of the ‘resurrection of the body’. They hoped that by destroying her physical body, they could destroy her hopes of eternal life….

We all know that when one is doing battle with the devil… he will devise all sorts of means to destroy what God has wrought…so the tortures and the punishments from the heathens grew more and more severe…they became demonic in nature. Evil was rearing it’s ugly head and taking with it, not only the practicing Christians…but those poor souls who got caught up in the fury and participated in the devilish torture…many souls were lost…not those who were killed…but those who participated in the gruelish torture…those who witnessed holy men being killed and did nothing…It was a horrible time to be on the fence…It was horrible time to not have allowed God His rightful place in their hearts, because without Him they were lost…and look at what happened….men willingly followed the snares of the devil….killing innocent men… “He that is lawless, let him be lawless still, and he that is righteous, let him be righteous still” (Revelation 22:11)… Of course, in the end,  God used it for His good…He always does…Remember, the blood of martyrs, acts as seeds of the Faith…wherever it falls, new growth always follows.

So as we contemplate these holy saints…these holy martyrs, let us turn to them for guidance, for their inspiration, because the time is quickly approaching that will reveal what is inside of each of us…Are we filled with the light of Christ? Will He find in us, a son or daughter? Is the light of Christ recognizable in you? It is time to be serious about your faith…to embrace it…and more importantly…allow it to embrace you…allow it to transform your very soul…

Let us fix our eyes on Jesus, the pioneer and perfecter of faith. For the joy set before Him He endured the cross, scorning its shame, and sat down at the right hand of the throne of God. Consider Him who endured such opposition from sinners, so that you will not grow weary and lose heart…. See to it that no one falls short of the grace of God and that no bitter root grows up to cause trouble and defile many.

Like Loading...
This entry was posted in Catholic Feast Days, Patron Saints, Some thoughts and tagged Marcus Aurelius, martyrs of lyons and vienne, scourging, St. Blandina, torture. Bookmark the permalink.