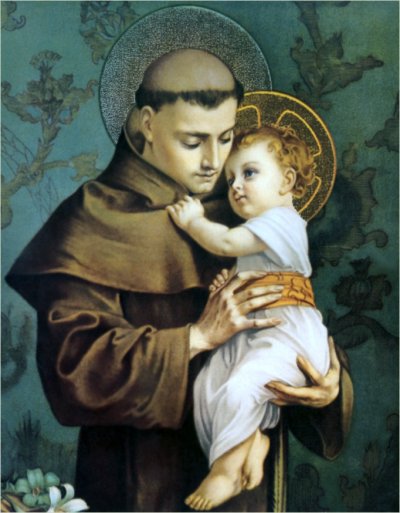 Saint Anthony may well be one of the most familiar of all the saints to the Catholic faithful. It seems that everyone has invoked this holy saint at one time or another for help with finding something that had been lost or misplaced….but there is much more to this Holy Saint as we shall soon discover…

Born to a wealthy but pious family in Lisbon Portugal, and baptized with the name Ferdinand, his family wished that he become a wealthy nobleman, but God had other plans for the young lad. At the age of 15 he gave up on his family’s desire that he seek wealth and power, that would have been his, and instead joined the Augustinian Order.

After just two years of study, he requested to be moved to a convent that was further from his home, as he was frequently distracted by visits from his family and friends. He was granted his request and moved to the Convent of Santa Croce in Cóimbra in the year 1212. He remained there for eight years, immersing himself in his studies and developing his prayer life. Having been gifted with an excellent memory and the gift of understanding, he was able to gather a treasure trove of information from the writings of the Holy Fathers and became quite versed in theological knowledge.

In 1220, his heart was stirred by the blood of martyrs. He watched as the bodies of the first Franciscan martyrs, who had suffered death in Morocco, were returned to the Church of Santa Croce, and carried through the monastery were he was serving. His heart became inflamed with the desire of martyrdom, and he resolved to become a Friar Minor, so that he might be able to travel to unruly lands and preach the Faith to the Moors, suffering for Christ’s sake, perhaps even giving his life. In 1221, he joined the Franciscan Order and took the name Anthony.

Soon after joining the Order, as he was preparing to sail for Morocco, he was stricken with a severe illness…God’s plan for Anthony was starting to reveal itself… He was unable to travel to Morocco and set sail for Portugal. However, the ship was overtaken by violent storms and he landed upon the coast of Italy, where he remained for some time until he was able to regain his health. While he recuperated, he read, prayed and continued his studies of the Sacred Scriptures…unbeknownst to Anthony…God was continuing to prepare him for his future task.

During this time, as Anthony was living his quiet life, an Ordination was planned for the Franciscans and the Dominicans. Through some oversight of the planner, no one was appointed to preach. Though the superior approached the Dominicans, each of them declined, as they were not sufficiently prepared. in a last ditch effort to have someone preach, the Superior turned to Anthony and forced him to speak. Out of obedience, Anthony complied. Though it started out roughly…the more Anthony spoke, the more impassioned he became…the Holy Spirit was moving through him. Soon he was explaining the most hidden sense of Holy Scripture with eloquence and expertise that all assembled were struck with amazement. From that day onward, St. Anthony became one of God’s greatest teachers, speaking in front of vast numbers of Faithful spreading the Word of God throughout the lands….sealing his fate as one of the great Doctor’s of the Church.

With great zeal, Anthony preached to the masses, often confronting heresies and converting many with his sincerity and holiness. He was often called ‘Malleus hereticorum’ or Hammer of the Heretics. He spoke to all with the same air of Truth…rich and poor alike, often bringing the people to feel a true sorrow for their sins without harshness. With his gift of oration, he was able to convey the Good News of the Lord and bring many into the Faith. At one point he was called to preach Catholic doctrine to the Albigensian, who were a heretical group in the southern part of France during the 12th and 13th centuries who believed everything in the material world was evil. With his sincerity and holiness, he converted many back to the True teachings of the Church.

Many miracles surrounded St. Anthony. One such miracle was when a group of heretics had poisoned his food, which became in-noxious as St. Anthony blessed it with the sign of the Cross. One of the most noted miracles was the apparition of the Infant Jesus to St. Anthony.  French writers say it took place in the province of Limousin at the Castle of chateauneuf – las- Forêt, between Limoges and Eymoutiers. However, Italian writers say it happened near Padua. Either way, one evening when St. Anthony was reading and studying Bible Scripture, the Baby Jesus appeared on top of the Bible pages, which was cradled in St. Anthony’s hands. The Infant Jesus, reached up and caressed St. Anthony’s face in a loving manner. 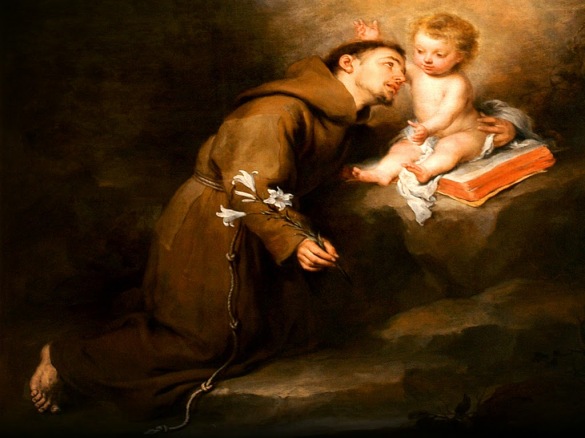 Eventually, St. Anthony found his way to Padua where he settled. He continued to preach and write. When he was 36, he was stricken again with a severe illness, only this time he did not recover. On June 13th, 1231, he died in Padua. Only one short year later, he was declared a saint.

Blessed be God in His Angels and in His Saints

St. Anthony, gentlest of Saints, your love for God and charity for his creatures, made you worthy, when on earth, to possess miraculous powers. Miracles waited on your word, which you were ready to speak for those in trouble or anxiety. Encouraged by this thought, I ask you to obtain for me the favors that I seek (mention your request here).

The answer to my prayer may require a miracle, even so, you are the Saint of Miracles.

O gentle and loving St. Anthony, whose heart was full of sympathy, whisper my petition into the ears of the Infant Jesus, who loved to be held in your arms; and the gratitude of my heart will ever be yours.

Like Loading...
This entry was posted in Patron Saints and tagged Anthony of Padua, Augustinian Order, Convent of Santa Croce, Doctor of the Church, finder of lost things, Hammer of the Heretics. Bookmark the permalink.