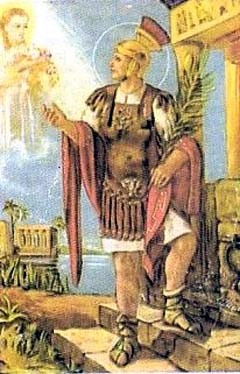 As we come to the final day of June, the month is rounded out with Saint Basilides of Alexandria. Unfortunately very little information was written about his life prior to the events surrounding his conversion… What we do know, is that during the persecutions of Christians that took place under Septimius Severus’ rule, he served as a guard to the prefect of Egypt. As a pagan soldier, Basilides was assigned to guard the Christian prisoners. Saint Potomiana was one such prisoner.

Saint Potomiana was a beautiful, pious, virgin, who was tortured and imprisoned solely because of her Christian faith. Because there was so much hatred and animosity towards the Christians at that time, she had a guard that would watch over her as she was moved from her cell and taken to the area were she was extensively tortured, including being burned with boiling hot pitch which was poured over her body….trying to get her to recant her Christian faith. When their torture failed to break the young girl, an angry mob of gladiators gathered outside her cell and threatened to rape her….but God had touched the heart of the soldier Basilides…and the once pagan soldier, defended his young charge from being defiled by the heathen mob.

The following day Potamiaena, thanked the soldier and promised that she would pray for him after she was dead….which came soon enough..for later that same day, she was thrown into a pot of boiling pitch….martyred for the Faith…thus spreading Christianity with her life…her blood…

Though she suffered tremendously at the hands of a pagan government, she remained true to her faith and did not turn her heart away from the Lord throughout the entire ordeal…The grace she received from God gave her calmness and courage, which when witnessed by her guard had an effect on his heart…and without even realizing it… he had taken the first step in his conversion…His compassion to save her from the crowd, served as a means of saving himself as well….And as his reward, God allowed the young saint to visit Basilidies three nights in a row, telling him that she was praying for him and his conversion.

Soon after, to the surprise of everyone he knew… he converted to the Christian faith and was baptized. Gleaning a bit of that same strength he had witnessed in the young Potamiaena, he was also given the grace he needed, as he professed his faith. Like other Christians of the time, he was soon imprisoned…..tortured… and  then sentenced to death. He was decapitated shortly after and his feast day is celebrated June 30th.

Let us pray that we may accept whatever God’s Will is  for us, and that we may live our faith with the same courage and calmness that was displayed in Saint Potamianea, so as to convert the hearts of those around us….especially those who wish to do us harm. As always, we ask this through Christ Our Lord. Amen.