In the tradition of the Holy Mother Church, today we celebrate the feast of St. James the Greater, who was one of the twelve Apostles of Jesus. He was the son of Zebedee and Salome, and older brother of John the Evangelist.  Both he and his brother, were out fishing with their father, Zebedee, when Jesus called to them. Upon hearing His voice, the two brothers immediately left their father, abandoning their fishing nets, to follow Christ and become fishers of men.

In the gospel of Mark, we read about the close relationship the two brothers had with Jesus, particularly James. Their faith and their zeal made them great disciples…they were fearless and because of their fearlessness they were even referred to as ‘The Sons of Thunder.’..But even they needed cleansing…and several times in the Bible we read where Jesus had to correct them….correct the assumptions that were made about them.…But they persevered and remained steadfast with Jesus, and this steadfastness earned them a place with Christ. Of the twelve apostles, James, and his brother John, were right alongside Jesus during several important events during His ministry. They belonged to the select group that were present during the raising of Jairus’s daughter.

Along with Peter, they were even allowed a glimpse of Jesus and His Glory when they witnessed the Transfiguration of Christ. In the Garden of Gethsemane, St. James was one of the three apostles to witness the Christ’s agony.

When St. James and St. John heard the call of Christ, they left their worldly belongings behind and followed him. We often see images of Saint James with a walking stick, to symbolize for us, that he was a pilgrim, a man who traveled to distant lands to spread the Words of Christ. After the death of Jesus he traveled to Spain, preaching what Christ had taught him. He remained in Spain for nine years and devotion grew for the saint and a basilica was constructed in his honor. To this day he is the patron saint of Spain. 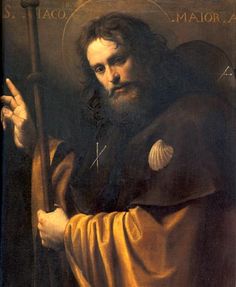 It was the year 44, and Saint James was in Jerusalem, preaching and curing the sick in Jesus’ name,  when orders were given by King Herod Agrippa that Saint James was to be brought before him. It seems that the Pharisees had already tried several times to silence Saint James, but whenever someone was sent to capture the great saint, they were instead, converted. This time though, Josias, who was a scribe among the Pharisees was sent. He captured Saint James and put a cord around his neck, taking him before this ‘third’ King Herod, who was the grandson of the first. The King, wishing to please the Jews, decided to persecute the Christians…. starting with the fearless Saint James, whom he condemned to die by the sword.

As Saint James was taken to his place of execution, his fearless confession of Jesus Crucified was so powerful, that the scribe Josias was moved to conversion. He begged pardon of the great saint and was taken with the apostle and condemned to death as well.

“About that time King Herod laid hands upon some members of the church to harm them. He had James, the brother of John, killed by the sword, and when he saw that this was pleasing to the Jews he proceeded to arrest Peter also” (Acts 12:1-3a).

Saint James not only serves as a reminder to the faithful of how to love the Lord and leave everything of the world behind, but also serves as an example for us, that with Christ we will be able to stand up for the Truth and that with the help of the Holy Spirit, we too can be fearless in proclaiming the Truth that Christ came to share with all the peoples of the world. May we seek his intersession, so that we too, may have the strength and courage needed to fulfill our daily obligations to the Lord in serving Him as He served others. Saint James the greater, pray for us.