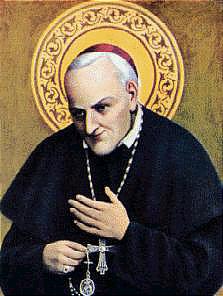 As we enter this final month of summer, we encounter one of the most gifted saints in the history of the Catholic Church, Saint Alphonsus Maria de Liguori. St. Alphonsus is one of the greatest moral theologians and spiritual writers the Church has ever had. Not only did he excel in spiritual matters, but he was a civil lawyer as well, having received his doctorate in law by the time he was 16. He was also gifted in the arts. He was a painter, a musician, a poet, an architect and a prolific author, penning over 100 books. Since his death in 1787, there have been over 20,000 editions of his works published, proving the timeless message of his writings. Not only are his works a treasure trove of sacred wisdom and learning, wrought with moral teaching, they are beautiful pieces as well.

St. Alphonsus is the patron saint of confessors, and moral theologians. Since he was an excellent spiritual advisor, he is also the perfect intercessor for help when seeking out one’s vocation in life…which is one of the reasons his books remain so sought after… Not only is he relied upon for help in theological matters, he is often called upon for matters of the body as well.  For even though he was blessed with many spiritual gifts and graces, he suffered from many physical health problems, including blindness which increased as he aged. But the most pronounced health issues he dealt with, was his arthritis, which not only twisted his body, but caused him physical pain and daily suffering. Due to the grace and good nature in which he handled his sufferings, his intercession is often sought for those who are afflicted with arthritis and rheumatism, and over the years he has become the patron saint for those suffering from those diseases.

Popes throughout the years have often spoke about St. Alphonsus with high regard.  In 2011, while speaking to the general audience who had gathered in St. Peter’s square, Pope Benedict XVI stated that “St. Alphonsus Liguori never tired of repeating that priests were a visible sign of the infinite mercy of God, Who pardons and illuminates the minds and hearts of sinners that they might convert and change their lives.”  Pope Benedict continued, “In our age, in which there are clear signs of a loss of moral conscience and – it is necessary to note with some concern – a certain lack of respect for the Sacrament of Confession, the teaching of St. Alphonsus remains valid.”

Saint Alphonsus is the only professional moral theologian ever to be officially declared a saint in the Holy Mother Church, and was canonized in1839. In 1871, he was declared a Doctor of the Church by Pope Pius IX. 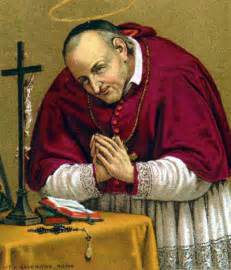 “May the two names so sweet and powerful, of Jesus and Mary, be always in our hearts and on our lips.” – St. Alphonsus Liguori

Prayer composed by St. Alphonsus Liguori, to be said before the Blessed Sacrament

My LORD Jesus Christ, Who because of Your love for men remain night and day in the Blessed Sacrament, full of pity and of love, awaiting, calling and welcoming all who come to visit You, I believe that You are present here on the altar. I adore You, and I thank You for all the graces You have bestowed on me, especially for having given me Yourself in this Sacrament, for having given me Your most holy Mother Mary to plead for me, and for having called me to visit You in this church.

I now salute Your most loving Heart, and that for three ends: first, in thanksgiving for this great gift; secondly, to make amends to You for all the outrages committed against You in this Sacrament by Your enemies; thirdly, I intend by this visit to adore You in all the places on earth in which You are present in the Blessed Sacrament and in which You are least honored and most abandoned.

My Jesus, I love You with my whole heart. I am very sorry for having so many times offended Your infinite goodness. With the help of Your grace, I purpose never to offend You again. And now, unworthy though I am, I consecrate myself to You without reserve. I renounce and give entirely to You my will, my affection, my desires and all that I possess. For the future, dispose of me and all I have as You please.

All I ask of You is Your holy love, final perseverance and that I may carry out Your will perfectly. I recommend to You the souls in Purgatory, especially those who had the greatest devotion to
the Blessed Sacrament and to the Blessed Virgin Mary. I also recommend to You all poor sinners.

Finally, my dear Saviour, I unite all my desires with the desires of Your most loving Heart; and I offer them, thus united, to the Eternal Father, and beseech Him, in Your name and for love of You, to accept and grant them.

Like Loading...
This entry was posted in Patron Saints and tagged Alphosus Liguori, arthritis, Doctor of the Church, Marian devotion, The Glories of Mary. Bookmark the permalink.