Feast of the Transfiguration of the Lord – August 6th 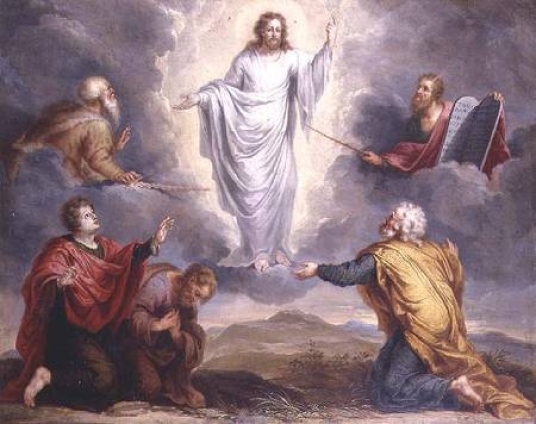 Jesus took Peter, James, and his brother, John,
and led them up a high mountain by themselves.
And he was transfigured before them;
his face shone like the sun
and his clothes became white as light.
And behold, Moses and Elijah appeared to them,
conversing with him.
Then Peter said to Jesus in reply,
“Lord, it is good that we are here.
If you wish, I will make three tents here,
one for you, one for Moses, and one for Elijah.”
While he was still speaking, behold,
a bright cloud cast a shadow over them,
then from the cloud came a voice that said,
“This is my beloved Son, with whom I am well pleased;
listen to him.”
When the disciples heard this, they fell prostrate
and were very much afraid.
But Jesus came and touched them, saying,
“Rise, and do not be afraid.”
And when the disciples raised their eyes,
they saw no one else but Jesus alone.

As they were coming down from the mountain,
Jesus charged them,
“Do not tell the vision to anyone
until the Son of Man has been raised from the dead.”

Today in the Holy Mother Church, we celebrate the Feast of Christ’s Transfiguration. We read in the Gospel that Jesus has taken Peter, James and John with Him up to Mount Tabor. It is getting late in the day and suddenly they are surrounded with Light, it is shining from Jesus…His whole Being is radiating in His Godly glory. It is then that the Apostles notice that Jesus is standing in between Moses and Elijah. They are overcome with joy to be in His presence….a feeling that they wish would go on longer, as noted in Peter’s comment about being glad to be there and wishing to set up tents for them so they could stay there longer.

Initially, God’s intention is lost on them, but then God speaks directly to the Apostles, telling them to look at His Son with Whom He is well pleased. He also tells them to listen to Jesus. The realization that Jesus is indeed God….causes the apostles to become afraid…but just as quickly as He was transfigured into God…He becomes Jesus, ‘the man’, and assures the apostles with His touch, speaking to them, He takes them back down the mountain.

God reveals Himself to each of us in different ways. But most of the time, we are like Peter, and we don’t understand what He is saying…Unfortunately most of us don’t even hear Him when He calls…we are so caught up in the world that we don’t even recognize His voice when He calls us…revealing Himself to us in the circumstances of our lives. And sadly, even though we are faithful Catholics….most of us ignore the Body of Christ in the Blessed Sacrament. We look at the Eucharist with eyes that lack the Faith that is needed to truly understand that we are in fact in the presence of our Blessed Lord. We go to Mass,  but fail to recognize that in fact we are having our own Tabor moment every time we receive Communion….Christ is not only present near us…He allows His Body to be consumed into our bodies…our hearts and souls as well.…

Sadly, most of the time we are more or less just going through the routine…not even realizing that Christ is actually present within us…it is quite humbling when you think about it. Christ took His three favorite apostles with Him into the mountain, and yet He comes to us…you and me…every time we attend Mass…more importantly…every time we receive the Blessed Sacrament…it is an awesome Truth that most of us fail to understand…

So as we listen to the Gospel readings today, and spend some time thinking about Jesus and how He revealed Himself as the God He truly is to the Apostles…pray that the next time you receive Communion…that God will grant you the grace to have a Mount Tabor moment…and that spiritually you will be able to recognize Jesus in the Eucharist you have just consumed.