On August 11th, in the Holy Mother Church we celebrate the Memorial of Saint Clare of Assisi. Her story has the beginnings of nobility and wealth…a life of accommodation was laid before her, but as we shall soon discover, her heart and mind did not long for such things….Rather, her heart belonged to our Blessed Lord and she focused not on the things of this world, but rather, on the things of God and Heaven.

Clare was born in the year 1194 in Italy. Her parents were Favorino Siffi,the Count of Sasso- Rasso,  and his wife the countess,  Blessed Orolana. Clare’s mother was a very pious woman and made sure that when Clare was young,  that she taught her about  the Faith…planting a seed within her daughter that would grow into so much more. She was also taught to read and write and to spin yarn and do needlework as well. Clare grew into young woman of fine stature, and was quite beautiful, certain to have a very comfortable life ahead of her…but she was young and God was already pouring His grace into her soul and one night when she was 18 she went to hear St. Francis of Assisi speak….and his words…the message he spoke, was just enough to seal the deal, and shortly after, she sought him out and begged him to teach her how to live her life completely for God. Saint Francis agreed to do so, but for the time being she returned home with her parents.

The following year, her parents promised her hand to a wealthy young nobleman…which most girls would jump at the chance to marry…instead she gathered with her cousin and fled….seeking out the poverty St. Francis had to offer her instead.Upon their arrival , she had her beautiful hair cut short and traded her fancy dress for mere smocks that looked more like rags than clothing. With the help of Saint Francis she lived a life offering everything for God and giving everything she had to the poor. Often she would forgo meals and instead pass her food out to the needy.

After joining with St. Francis’s group,  she resided at the Church of St. Damian, where the Lord provided for her a good number of like minded companions. Then with the guidance of  St. Francis she established a community of nuns, called the Poor Clares, acting as their superior. With zeal, she directed them for over forty years, leading them with her life serving as a beacon that her sisters could emulate. She even sought the approval of Pope Innocent IV, so that she and her community could live in absolute poverty, completely embracing the message of Saint Francis by living a life of total poverty.

You may have noticed that many of the  images of Saint Clare depict her with a monstrance in her hands. This comes from an event that took place in 1244. The following account tells us what happened:

“In 1244, Emperor Frederick II, then at war with the Pope, was ravaging the valley of Spoleto, which was part of the patrimony of the Holy See. He employed many Saracens in his army, and a troop of these infidels came in a body to plunder Assisi. St. Damien’s church, standing outside the city walls, was one of the first objectives. While the marauders were scaling the convent walls, Clare, ill as she was, had herself carried out to the gate and there the Sacrament was set up in sight of the enemy. Prostrating herself before it, she prayed aloud: ‘Does it please Thee, O God, to deliver into the hands of these beasts the defenseless children whom I have nourished with Thy love? I beseech Thee, good Lord, protect these whom now I am not able to protect.’ Whereupon she heard a voice like the voice of a little child saying, ‘I will have them always in My care.’ She prayed again, for the city, and again the voice came, reassuring her. She then turned to the trembling nuns and said, ‘Have no fear, little daughters; trust in Jesus.’ At this, a sudden terror seized their assailants and they fled in haste.” 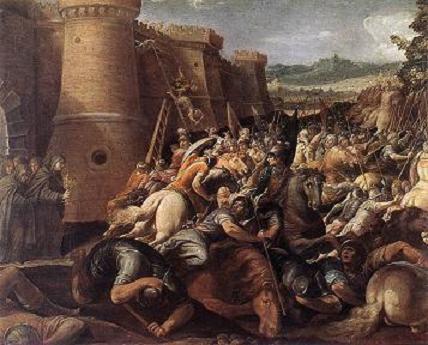 As is typical with those that are granted spiritual graces…she suffered much physical pain for the last 27 years of her life, spending many of her days dealing with illness. But true to her good nature, she endured these sufferings with heroic patience and intense prayer. During this time, Popes, Cardinals and bishops would often visit her seeking her advice. St. Clare died on August 11, 1253. She was canonized two years later by Pope Alexander IV. Her incorrupt body rests in the Basilica of Saint Clare in Assisi.

Let us pray…O God, who in your mercy led Saint Clare to live with a love of poverty, grant, through her intercession, that, by following Christ in poverty of spirit, we may also merit to contemplate you one day in the heavenly Kingdom. Amen.