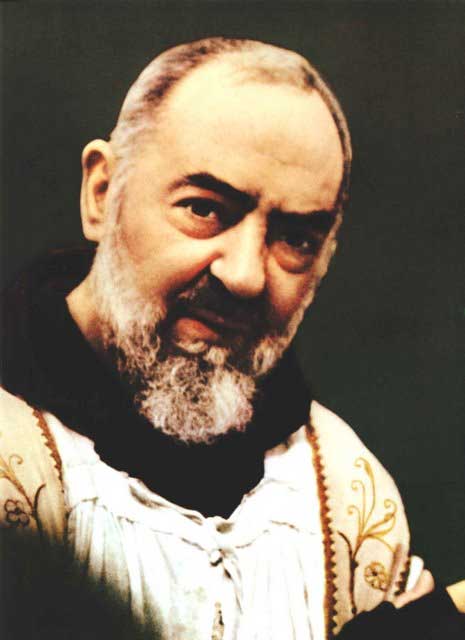 Saint Padre Pio is perhaps one of the most widely recognized saints from modern times. Having been born in 1887, he died in 1968, just forty nine years ago. There has been much written about this holy and humble saint. He even wrote a beautiful prayer booklet called “The Agony of Jesus,” which is available online and is a beautiful read. His feast day is celebrated on the 23rd of September, which is also the day my father passed away in 2014. I have written a brief post about my father’s death, back on his birthday in February, but as I was thinking about Padre Pio’s feast day, I started to remember all that happened with my father and his eventual conversion back to the Faith that he loved so much as a child. I’d like to share a bit of that with you today.

Throughout my years in high school, I can’t remember a time that my father wasn’t taking pills for his heart. It seems his family has been plagued by heart disease and as insurance against sudden death, my father always carried a small jar of pills in his pocket, just in case. Well, he survived through those years, but by the time I was married and raising my own family, my father’s heart troubles worsened…the doctor informed my father  that it was time for a quadruple bypass…and my father was worried.

I had already had my re-conversion to the Faith and was eager to share the Good News with my father… but he wasn’t buying...During these days most of what I told him seemed to go in one ear and out the other…he was too busy with the world and everything it offered him. But, as he learned about his surgery, he paused for a moment and listened…With God’s grace, I was able to convince him to go to confession...just in case...Afterwards, I gave him prayer books and told him I would be praying for him, and even though he barely let on, I now know, that he was in fact very comforted about the idea of having prayers said for him.

It was during this time that I discovered Saint Padre Pio. I fell in love with the saint, and decided to pray to him for his intercession for my father, since I felt that my father really needed the firm guidance that Saint Pio could offer.  His surgery went well, and soon he was in recovery. When I went to visit him, he grabbed my hand pulling me close. Smiling, he whispered in my ear, that he had experienced some wonderful things…I know he was just coming out from under the anesthesia…but my father was filled with a joy I hadn’t seen in him in years. He stayed in the hospital for several days…I can’t remember exactly how long… but I remember he started watching Mother Angelica on EWTN…much to everyone’s surprise.…

One day when I visited him…he was beaming…he told me that an old, bearded, monk in a brown robe had visited him, bringing him Holy Communion.  I was stunned…he told me that the old priest had spoke to him….From the description he gave me, it sounded like he was talking about Padre Pio. My sister who was there, shook her head. She told me that she had only left his room for a few minutes and that the only person she saw distributing Communion was a man in a green sweater vest…but I knew….I believed that the saint had visited my dad…and even though he soon forgot…I always remembered the kindness of Padre Pio when he visited my dad….

For the few weeks following his surgery, he would motion for me to come close so he could whisper things in my ear. He would say, “Ah, you’re here…I know you’ll understand…” It was a comforting time…I hoped…prayed… that he was ready to come back to the Faith, but unfortunately, just a few weeks after he regained his health completely, he allowed himself to be lulled by the things of the world and fell away from the Faith again… There were no more smiles…..no more whispers about grande things of joy .…and it seemed that the distance between us grew….but I never forgot that during his most difficult time….When I had reached out to Saint Padre Pio…He heard my pleas and comforted my father in a way that is beyond words….and even though my father wasn’t ready to turn away from his former life…I am certain… in retrospect…that Padre Pio always remained close to my father’s heart, never giving up, because years later, he was able to help guide my father home.

Like Loading...
This entry was posted in Catholic Feast Days, Patron Saints and tagged Padre Pio, praying for my father, praying for the intercession of Padre Pio, Sept 23rd. Bookmark the permalink.