Feast of the Miraculous Medal

Midway through the year of 1830, there was a growing angst in the hearts of men… the peace of France was about to be turned on its head. There was talk about overthrowing the government….The alleys and street corners were rift with the whisperings of a coming revolution…there was a breath of evil disrupting the peace of man’s heart. Once it was done….Paris would never be the same.

On one dark night towards the end of July, King Charles X exerted his authority and pushed the people over the edge when he published his four new Ordinances that limited the peoples’ rights… this action sparked a wave of destruction throughout the city. Crowds formed and roamed the streets, allowing themselves to fall prey to their anger…. and unfortunately, the Catholic Church which up until this time, had been enjoying a voice of authority over the people of France, became a target of their anger and priests were harmed…bishops were chased out of town and many of France’s beautiful Churches were destroyed.

But unbeknownst to the world…God had His own plan….for precisely at that moment in history, God allowed the Blessed Mother to pour forth His mercy...to pour forth His graces, and sent a message that would change the world forever….All of which started with the humble obedience of  a young novice named Catherine Labouré, of the Sisters of Charity, whose Motherhouse was in Paris, France.

Only two short weeks before the violence spread through the lands, at around ten thirty p.m. long after everyone had gone to bed, Catherine Labouré was roused from sleep by the urging of her guardian angel. When she awoke, she was directed to follow a small child (that according to her account…was very shiny) into to the convent’s chapel. Once she arrived at the brightly lit chapel, she saw the most beautiful woman she had ever seen waiting inside. The woman identified Herself as the Blessed Mother, and told Catherine that she had an important message…an important mission for her.

The Blessed Mother told Catherine that God had chosen her for a specific task, and that there would be many trials that she would have to endure. She was told to have confidence and to not be afraid. The Blessed Mother reminded Catherine that she must be fervent in her prayer and that she should make sure to focus on God…and not allow herself to be distracted by worldly things.

As the Blessed Mother continued, she told Catherine,“The times are evil. Sorrows will come upon France; the throne will be overthrown. The Cross will be thrown down and trampled. The Archbishop will be stripped of his clothes. Blood will flow in the streets. The side of Our Lord will be pierced anew. The whole world will be afflicted with tribulations.”  At this the Blessed Mother appeared very sad…sorrowful….almost struggling with the words, pointing towards the altar, she continued on,”Come to the foot of the altar. Here graces will be shed on all who ask for them. Graces will be shed especially on those who ask for them.”

Our Lady told Catherine that many sorrows would befall France, specifically the religious communities that lived there…many of the Faithful would suffer. She even went on to say that the Archbishop of Paris would be killed. She predicted that the whole world would fall into a deep period of sadness. Evil would be rearing its ugly head...and many would lose hope. She explained to Catherine that some of these things would happen soon, and that others would not happen for many years.

Shortly after the first apparition, the blessed Mother’s words rang true, and in July of 1830 the rebellion that had been brewing in the hearts of Frenchmen throughout France boiled over. King Charles X had drawn up new Ordinances for the people and had them published in the Moniteur, a popular French newspaper. Fueled by their outrage, these mobs took to the streets. The crowds of people threw whatever they could get their hands on….paving stones, bricks, bits of lampposts, flowerpots…and smashed the beautiful streets of Paris.  The mobs even ransacked the Churches, destroying whatever was in their way. France’s military lined the streets, and when the fighting broke out, some twenty one Parisians were killed by the soldiers. Motivated by the escalating violence, the rioters continued their rampage, and smashed all the street lights on the beautiful French Plazas, and when the last light post was torn down and the streets were wrapped in total darkness, the rioters dispersed and the turmoil ended for the night. 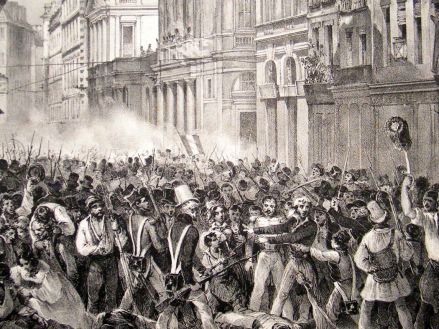 Early the following morning, the fighting resumed. King Charles X, remained away from the fighting, keeping his distance at Saint Cloud. He was assured that the fighting would soon be over, and that the rioters would run out of ammo. The military general even sent him word that everything was under control. The liberals in Paris had written up a petition asking for the ordinances to be withdrawn. The King tried to the calm the people by telling them that he would consider a negotiation, even though he had no intention of doing so.

By the third day of violence, the revolutionaries were in control. They were surprisingly well armed and well organized. They were able to block off the military troops. As the destruction spread, the mobs of people removed the country’s flag and replaced it with what they referred to as the ‘people’s flag‘ atop the rooftops of many important buildings… the French government  landmarks lay in ruin…Paris and many of her important landmarks suffered desecration and destruction…darkness spread….it was a sad time for France.

Four months later, on November 27 Catherine had the second vision wherein she saw a three-dimensional scene of the Blessed Virgin standing on a white globe with dazzling rays of light streaming from her fingers and she heard a voice say:

“These are the symbols of grace I shed upon those who ask for them.” A frame formed around the Mother of God and within it was written in gold letters, O Mary, conceived without sin, pray for us who have recourse to thee.“ 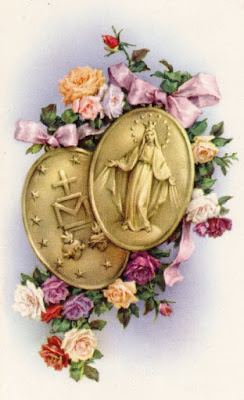 The voice then told her to have a medal struck after this model. Then the vision turned and on the reverse side was a large M with a bar through it and a cross over it. Beneath this M were the Hearts of Jesus and Mary, one crowned with thorns and the other pierced by a sword.

These visions occurred periodically until 1831. Because she wished to remain anonymous, she only told her confessor Monsignor Aladel, who received permission from the Archbishop of Paris to have the medal made. The first 1500 were made by the following June, and almost instantly there were so many reports of healings that instead of calling it the Medal of the Immaculate Conception it was renamed the ‘Miraculous Medal’. There were reports of conversions as well and the popularity of it grew in France.

Throughout all of this, Saint Catherine remained hidden from the public, she did not even appear at any of the canonical hearings concerning the Miraculous Medal. Eventually though, the evidence of the miraculous nature of this medal was so overwhelming that the apparitions of the Blessed Mother were sanctioned. She did not tell anyone until just eight short months before her death in 1876, and then she  revealed herself to be the visionary who had received the apparitions. Much like other humble saints, her sisters were surprised, as she had lived her life like quite the ordinary nun.

St. Catherine Laboure was canonized in 1947 by Venerable Pope Pius XII. Her Feast is November 27 as is the Feast of the Miraculous Medal, although in some places it is celebrated on December 8, the Feast of the Immaculate Conception because of its relation to it.

As I researched the Miraculous Medal I was amazed that once again, God had allowed His Blessed Mother to come into the world and present it with yet another gift of His infinite mercy… the miraculous medal….at precisely a time in history when it seemed that darkness would swallow all of France. Because even though we have free will and are free to chose our own destruction…He cannot look away…Because He is Love Itself… He is always merciful.  The Miraculous Medal was one such gift. Many people who wore it were cured of the plague, which was ravaging Europe at the time.

The Miraculous Medal is not just for France, but also for so many who suffer….there are healings and conversions surrounding this precious gift… healings that continue  to this very day. One such miraculous story can be found here. It just shows us…reminds us…how great is our God….how awesome He is to continue to allow His Mother ….Our Blessed Mother…to come to our aide and offer the people a bit of His mercy…a bit of His grace. Our Lady of the Miraculous Medal, Pray for us who have recourse to Thee. Amen

Like Loading...
This entry was posted in Catholic Feast Days and tagged Blessed Mother, France, King Charles X, Miraculous Medal, Pray for us who have recourse to thee, Revolution of 1830, Sisters of Charity, St. Catherine Laboure. Bookmark the permalink.