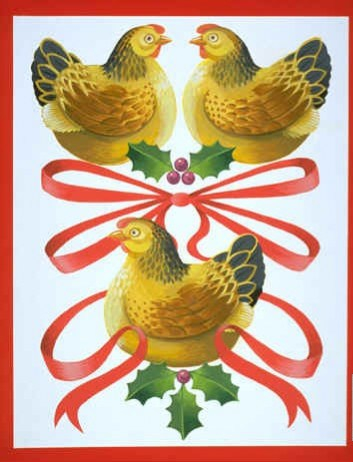 “On this third day of Christmas, my True Love gave to me…three French hens…two turtle doves and a partridge in a pear tree…”

Well, not really, but He did give us the wonderful Christ Child whose birth we continue to celebrate for the next nine days, right up until the Feast of the Epiphany. During this Christmastide, we are encouraged to keep our focus on the Lord, and the wonderful gift He gave us in His Son, Jesus. As we come to the third day of our celebration we look to the life of Saint John the Evangelist as an example in how we are to love the Lord.

Saint John the Evangelist was the only apostle who did not die a martyr’s death, but not because his enemies didn’t try…It seems that there were several attempts made on the life of Saint John. He was beaten and poisoned and thrown into a cauldron of boiling oil. But instead of being burned, he stepped out of the boiling oil unharmed. Another  time, he was given poisoned wine, and sensing that something was wrong, he blessed the wine before taking a sip, causing the poison to leave the chalice in the shape of a serpent.

And it wasn’t just his enemies that were set on his destruction. Once, John had set sail to travel to Asia to preach, but the ship was tossed about in a terrible storm, his ship was completely wrecked. All the crew, except John, were cast ashore. Several weeks went by, and John was presumed dead, but then miraculously he was washed ashore, unharmed, at the feet of his disciple Prochoros.

Many think that Saint John was spared from martyrdom, because he was the only one of Jesus’ apostles to stay with Christ throughout His suffering and agony and death on the Cross. John was the only apostle to hear the Last Words of Christ as He spoke from the Cross. He was the one chosen to stand at the foot of the cross and bear witness to Christ’s crucifixion with the Blessed Mother. Later, when he heard that Jesus was risen from the dead, he rushed to see, and was the first one to reach the tomb. When he met Jesus at the lake of Tiberias, he was the first one to recognize Him. Because he was such a dedicated disciple, he was chosen by Jesus to accompany Him on the ascent of Mount Tabor, and was there for the transfiguration, and witnessed  the proclamation by God that Jesus was “His beloved Son.”

After Christ’s crucifixion, John remained close to the Blessed Mother, and was with her as she breathed her last breath on August 15th. He officiated at her burial and was among the other disciples who discovered her empty tomb after she had been assumed into Heaven. 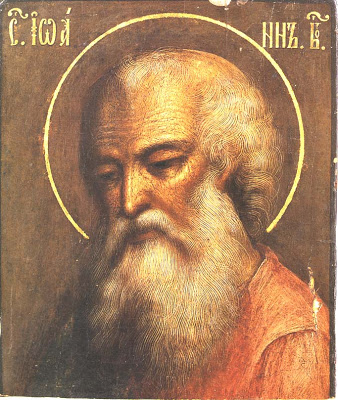 Having fulfilled his promises to the Lord, Saint John turned all of his attention to carrying the message of Jesus Christ to all areas of the spiritually dark world. He traveled and preached throughout Asia Minor with such passion, that many were converted to Faith. Unlike the other apostles, Saint John lived to the old age of 105…continuing to serve the Lord for the duration of his life. Which makes him a record holder at the most conversions for Christ. It is established that he converted more than 400,000 pagans to Christianity. Imagine what a man like that could do to evangelize with our modern technology!

So as we continue our journey, hoping to be the Light of Christ in our present world, that seems to grow darker in sin as the days go by…let us turn our intercessory prayers to Saint John the Evangelist and ask for his guidance so that like him, we can stand with Christ through all of our trials and convert the pagan world to the one True and Holy Catholic Church. Saint John the Evangelist, pray for us.