We three Kings of Orient are, bearing gifts we traverse afar, field and fountain, moor and mountain, following yonder star.

Today in the calendar of the Traditional Catholic Church, January 6th is observed as the Feast of the Epiphany…however in the Novus Ordo, or the New Order, since Vatican II, it has been switched to Sunday,  but regardless of its date on the Liturgical calendar, it is the feast which renews the joy we just experienced at Christmastime in the Nativity of Our Lord…it is a second Christmas of sorts… further revealing to us, the birth of Christ in a whole New Light…

At Christmas, we found a few shepherds who were called by Angels to recognize that Jesus was indeed the Word made Flesh, but in the Epiphany we celebrate the fact that the very voice of God called out to the whole world…a world darkened by sin…With the Light of the Star…the Divine Light of God, that served as a revelation to the world of Christ’s birth… It was His voice shining through the star, offering them a beacon of hope in the darkness of night, which prompted the wise men to seek Him, to seek out the manifestation of God Himself … and adore Him in the Infant Jesus…Whom they found lying in a manger.

In the history of God…or rather, in the history of Jesus and the manifestations of His divinity to the world, January 6th is an important date. According to a long list of theological writer’s including Pope Benedict XIV, there are three distinct manifestations of God’s glory that occur on the date of January 6th, starting with the Adoration of the Magi on the Feast of the Epiphany. It was also January 6th when Jesus was baptized by St. John, in the River Jordan. And finally, it was on January 6th when Mary prompted Jesus to perform the Miracle at Cana…the changing of  water into wine…which signified the start of His public ministry. Of course, in the Church’s Liturgical calendar, the Feast of the Epiphany is the one that is celebrated because with it, it brings the fulfillment of the promise of Advent. 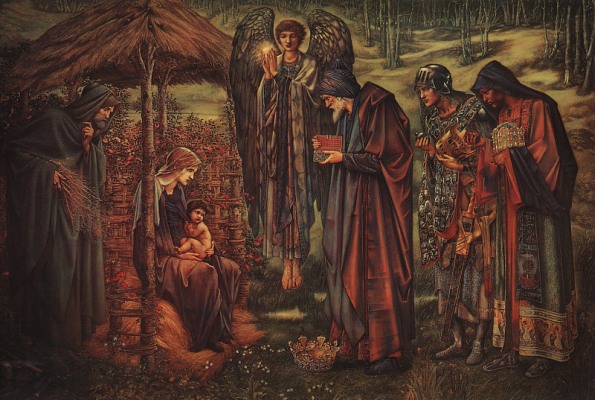 Born a King on Bethlehem’s plain,
gold I bring to crown him again,
King for ever, ceasing never
Over us all to reign.

The three magi represent “the first-fruits of the gentiles,” they were the first to recognize the Light of God, in a world which had long been swallowed by the darkness of sin. The three Kings symbolize all men. And even though there is no Scriptural references, we have Tradition … which also points out that the three wise men represent the different ages of man. They signify that God has invited all to worship Him as the One True God… God loves all men, regardless of their differences…regardless of their age… regardless of their languages, or their culture. The Wise Men show us, that regardless of who men are… that all who listen to His call…. will be loved by Him… equally.

As we finish up this season of Christmas, let this ‘second Christmas’ remind us of our recent joy at the birth of Our Lord and Savior! As we contemplate Christ, Who is with us today in the Eucharist, still calling each of us to Him…everyday…. Let us pray that we may imitate the Wise men who heard the quite stirring of God’s call in their hearts…and responded, whether they understood what it meant or not, they followed it, traveling miles across distant lands.. unsure of what they would find.

The world we are living in is once again being consumed by the darkness of evil, and   the Truth is often distorted and profaned. Yet, God still calls us. Stirring our souls. Shining His Light to guide us through a world of darkness. As faithful Catholics… faithful Christians…we have to pray that we will be like the Magi and follow Christ’s Light  even though we may not always know what to expect… We need to pray that we will be like them …. able to discern God’s calling in our soul. As the Church militant upon this earth, we are only called to follow Christ’s Light…but also, to be that same Light to the world today. We will need courage. We need to live our lives so that we can serve as a reminder to this godless world…that God is still here…that Christ is still with us...and during this Feast of the Epiphany, we should strive to share this message of Christ’s Love with the world, and more importantly…that through Christ, the world has received her salvation.