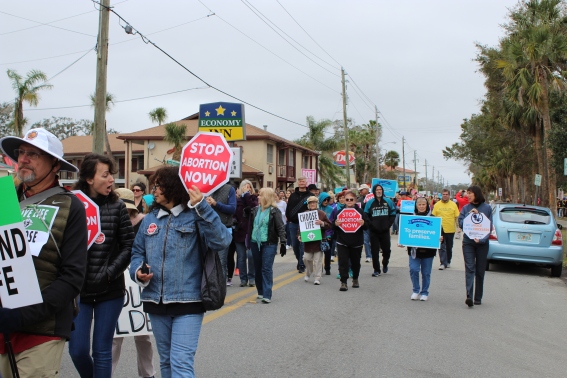 This year marks the 45th year of legalized abortion throughout the United States from Roe vs. Wade…it is a sad reminder that our legal system… The system put in place to protect the citizens of the United States... and often proclaimed to be one of the best in the world…has failed to protect millions of unborn babies from being ripped apart and killed. Regardless of the countless lies…. There is nothing in this law that protects anyone. It is a law that sanctions the murder of the innocent. Herod would be proud.

“Thou shall not kill...” Do you recognize this? It’s one of the Ten Commandments. As Catholics… as Christians…we are obligated to follow God’s laws. We are obligated to March. Not just on the 22nd…not just in St. Augustine or up in Washington D.C. No, we are called to March into the battle fields every day. Our cities and towns are filled with abortion mills where they prey upon those who are often confused and hopeless… offering them a violent way out… a way that only further damages the soul. If you have been paying attention to the news, you know that these places have been caught selling the actual body parts of the babies they have aborted…and throwing the other parts away like trash… We need to march the sidewalks around these hell holes …offering prayers and counseling…. It’s really quite barbaric to  think that this atrocity is protected by law…

We are lied to and told that these abortion laws protect women… empower them somehow… But the Truth is…There is nothing empowering about having a human life ripped from your body.  Abortion kills babies…Abortion hurts women. That is the horrible truth. These very women who are hurt, are often abandoned once the abortion is done… Many wind up in hospitals…many wind up depressed….they are suffering… we need to march with them… Comfort them with Christ’s love and compassion, allowing God to be our guiding voice. We have to be strong. Who else will stand up to this evil?  We had better pray.

Of course there are pro-life clinics where young women can turn to for real help when they are faced with a ‘crisis’ pregnancy… These places do great work, but they are often in dire need of funding and volunteers. This is another marching ground we should frequent…The world is a violent place for the innocent… the devil is preying on the vulnerable and young…we need to march…we need to become a voice for the voiceless as well as Light for the hopeless…There is a world of hurt out there waiting for help… waiting for hope.

This will be a difficult task… but we are the army of God. We are His Church Militant upon the earth. And if we truly want to end this atrocity we must march…not only on this day of remembrance… No, we must put on our boots…and we must march everyday for life.