Our Lady of Lourdes – “I Am The Immaculate Conception” 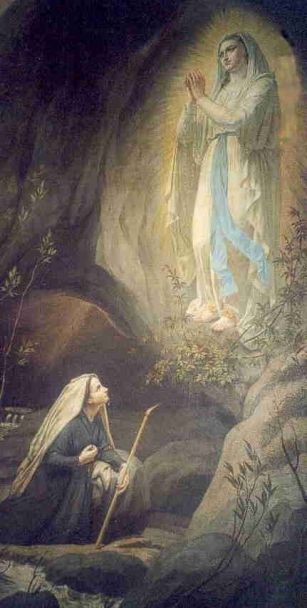 In the Traditional Catholic Church, February 11th is recognized as the Feast of Our Lady of Lourdes. It celebrates the first of eighteen visits that began in 1858 and  occurred in Lourdes France, in which the Blessed Mother appeared to a simple young girl, Bernadette Soubirous. During these visits, the Blessed Mother instructed Bernadette to dig in the mud, which revealed a miraculous spring. The Blessed Mother also told Bernadette that she wished that a Church be built on the site.

In the Church, it has always been recognized that the Blessed Mother was conceived without the stain of original sin…that she was ‘Immaculately conceived’ in the womb of her own mother. The Church teaches that Mary was kept free from all actual or personal sin, by a special grace from the Lord. Because the Lord knows all things, He knew  that He would have to redeem mankind from their sins by sending His Only Begotten Son to die for them, God created His Mother, Mary, pure and free from any stain of sin…She was the spotless tabernacle in which Jesus would reside…It makes perfect sense. If you were God and wanted to send your Son into a world marked with sin, would you send Him in a dirty, spotted vessel…or would you use the cleanest…Most Holy, untarnished vessel? Well, that is exactly what the Lord did with Mary. He created her to be spotless…pure and Most Holy.

Saint Maximilian Kolbe who was martyred in Auschwitz,  in the year 1941, developed a special devotion to the Blessed Mother, particularly in regard to Her Immaculate Conception. He understood that the Blessed Mother was the way to fight all heresies…He realized, after all, that it was She who would crush the head of Satan…   “I will put enmities between thee and the woman, and thy seed and her seed: she will crush thy head, and thou shalt lie in wait for her heel.” (Genesis 3:15) 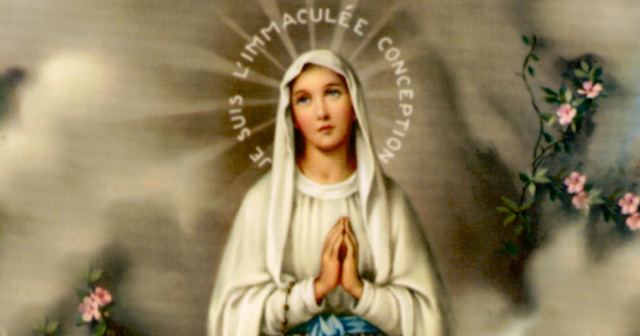 Saint Maximilian Kolbe created an an association which reflects this notion in its very name: the Militia Immaculatae. He understood the absolute importance of her role in the salvation of mankind. Much of his writing dealt with Mary under the title of the Immaculate Conception. When speaking about Mary he said,

“The creature most completely filled with God Himself, was the Immaculate, who never contracted the slightest stain of sin, who never departed in the least from God’s will. United with the Holy Spirit as His spouse, She is one with God in an incomparably more perfect way than can be predicted of any other creature.”

In prayer, he often contemplated her words to young Bernadette for many years. ‘How could She describe Herself as the Immaculate Conception, and not as the One who was Immaculately Conceived?‘ It was a theological question that would puzzle him almost to the end of his life. But there is grace, and shortly before his arrest he had scribbled down some notes as to what it all meant. In a moment of God’s revealing goodness, Maximilian had came to understand that Mary was indeed the ‘created‘ Immaculate Conception, so that She would be able to become the Mother of God through the work of the ‘uncreated‘ Immaculate Conception, which was the Holy Spirit.  Kolbe explained that, everything that exists outside of God, depends upon God in every way…every created thing is in Truth an effect of the ‘Primal Cause.’

In other words, the conception of Jesus in the womb of the Virgin Mother, with the power of the Holy Spirit is eternal. And because Mary was conceived without sin by the same power of the Holy Spirit…she was completely conformed to his Will…and by the singular grace of her Immaculate Conception, she is totally receptive to God’s love. But her importance did not end with Christ’s birth…that was, in a way, just a part of the beginning. We know that God intended for her to be the Mother of all men, as shown when Jesus, hanging from the Cross, tells His beloved disciple John, “Behold your Mother.” (John 19:26) He was giving His Mother to all of the Faithful. Then if one needs more proof, we know that when Her physical life was over, she did not die, but rather, she was Assumed, body and soul, into Heaven, where She now resides with God the Father …God the Son…and God the Holy Spirit. She remains the living, human conduit for the graces that the Holy Spirit wishes to distribute to us.

And Kolbe goes on to say:

“The Holy Spirit manifest his share in the word of Redemption through the Immaculate Virgin, who, although she is a person entirely distinct from Him, is so intimately associated with Him, that our minds cannot understand it. So, while their union is not of the same order as the hypostatic union linking the human and divine natures in Christ, it remains true to say that Mary’s action is the very action of the Holy Spirit.“

Unfortunately, so many Christians and even many Catholics don’t understand this role of Mary. They feel that somehow this elevates Mary into a position in which she doesn’t belong…but that is so far from the Truth. Pope John Paul II echoed Saint Maximilian Kolbe when he wrote in 1985,

“the Immaculate Conception does not mean only an exaltation of Mary, as if she had been transported outside of all those who have received the inheritance of the  stain of our first parents. On the contrary, it means her insertion into the very center of the spiritual combat, of this “enmity” that in the course of human history places the Prince of Darkness” and the “Father of Lies” in opposition of the Woman and her Seed.

Through the words of the Book of Genesis, we see Mary Immaculate in all the realism of her election. We see her at the culminating moment of this “enmity”: at the foot of the Cross of Christ on Calvary. There “She will crush your head and you will strike Her heel.” 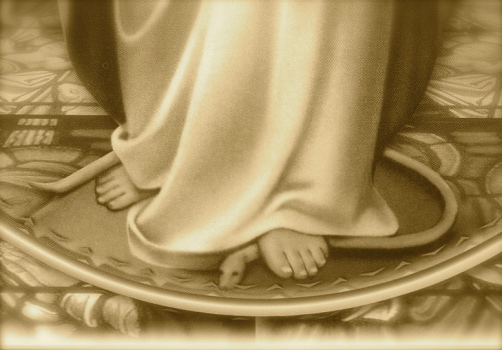 Throughout the history of the world the Blessed Mother has come to help guide mankind closer to her Son. When there is an error spreading through the world, she comes like a Light, guiding us back along the path which leads us closer to Jesus. She has given us different tools to help us on our way. The rosary being one of the most important. She even taught the young Bernadette to pray the rosary for conversion of sinners. We still have the rosary today. It is still as effective as it was then. It is one of the most important ways we have of turning our world away from the destructive path it is headed…but we must pray it….everyday…

The Blessed Mother continues to be an example for all mankind. She was created out of God’s pure love….and she loves her Son, with a completeness that is beyond our comprehension, and yet, She continues to avail herself to mankind so that they too, may grow to love Him with a deep intimacy as well.  With a Most compassionate heart, She  wishes for us to love Him with all of our beings. She is tender and caring…often times it is said that she is the reason that God has withheld His just punishment from this evil world. She has come, over the course of this world’s history and has asked us to pray… asked us to allow ourselves to grow closer to her Son. With the rosary, we have an opportunity to do something really special…we have an opportunity to do something really grand…the time for making excuses is gone. We must unite ourselves with the Immaculate Heart of Mary….and love the Sacred Heart of Jesus…with all of our mind, all of our body….all of our being. As we prepare ourselves for this coming Lent, let us resolve to hold nothing back… let’s give it all back to Him…for His greater Glory. Amen.

Like Loading...
This entry was posted in Catholic Feast Days, Uncategorized and tagged Auschwitz 1941, I Am the Immaculate Conception, Militia Immaculatae, Our Lady of Lourdes, Saint Bernadette Soubirous, St. Maximilian Kolbe. Bookmark the permalink.