July 10th, the summer heat is upon us…and the temperatures are rising across the country… in some areas they are preparing for record heatwaves… One look at the Catholic calendar, and with the number of martyrs that are mentioned on this date…it seems that it wasn’t just the temperatures that were boiling over… but the people as well. So many times in the history of the Church, many Catholics have been killed precisely at moments like these…when people are feeling lost… when people allow themselves to be caught up in the anti- Christian sentiments of the day… allowing themselves to be reigned in the anxiety that is spewed into the crowds… Angry mobs are notorious for violence… people allow themselves to be swept into the frenzy of emotions…Many times, they don’t even know exactly what they are angry about… but they go with the flow and soon there is an eruption of violence… and more often than not…innocent people are hurt…and other times…innocent people are killed…

That is basically the story behind the death and martyrdom of two Roman sisters, who wished to remain virgins, consecrated to Jesus. But because of the anti- Christian sentiment, they became victims of an angry government intent on destroying Christianity. 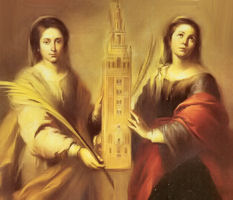 Rufina and Secunda were sisters and virgins of Rome. Their parents had promised them in marriage to Armentarius and Verinus, who were also Christians.  But when the persecution of the Emperor Valerian fell upon the Church, these two men apostatized. The two sisters refused to follow them down their treacherous path and refused to marry them, consecrating themselves to Christ.

They were apprehended during the reign of the Emperors Valerian and Gallienus. When Junius, the prefect, saw that they were in fact committed to their ‘promise’ to Christ, he threatened them. When they still could not be shaken from their resolve, he ordered that Rufina be beaten with rods. While her sister was being beaten, Secunda approached the judge. She asked him: “Why do you treat my sister thus honorably, but me dishonorably? Order us both to be scourged, since we both confess Christ to be God.”

Outraged by the words that Secunda spoke, the judge ordered both of the sisters to be thrown into a dark and dreary dungeon. As soon as the sisters were cast into the dark cell, a bright light and a most sweet fragrance filled the prison. Angered once more, the judge had them thrown into a bath, in which the floor was made red- hot, hoping to burn the sisters. But again, God protected them and the virgin sisters remained unscathed. Immediately he ordered that they have stones tied about their necks and that they be thrown into the Tiber River. But once again, they were rescued by an angel.

In a last ditch effort to kill the sisters, the judge had them taken ten miles outside of the city, on a road called Aurelian Way, and he ordered that they be beheaded. Afterwards their bodies were buried by a matron named Plautilla on her estate. Later the bodies were transferred to Rome, where they now repose in the Basilica of Constantine near the baptistery.

As we make our way through these hot days of summer, when tempers are flaring at every turn, and mobs are gathering at every corner… readying for an attack... let us pause and collect ourselves… our prayers… and let us spend some time in quiet contemplation before the Lord, asking Him to guide us in all of our path, in our of our journeys and decisions, so that we may not allow ourselves to be overcome with emotion…overcome with anger and bitterness. Let us place our trust in His Divine goodness…asking for the grace and mercy we need so that we may make it through the summer unscathed by the the violence that is erupting around us.