As we continue to encounter new saints…we discover that there are many saints who even prior to their birth were being prepared for the great task that God had planned for them… they loved God from their very beginnings…Some of these saints just shine…Their light is so bright, that even as children they were already being recognized for their holiness. Saint Anthony Mary Gianelli was one such saint. 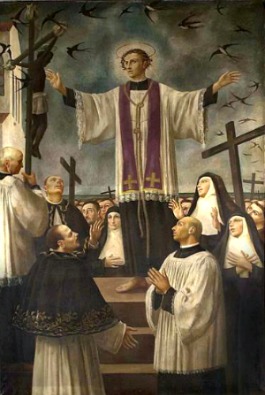 Anthony Mary Gianelli was born in 1789 to a poor but pious farming family near Genoa in the northern part of Italy. His mother taught catechism and his father was known throughout the town as a generous peace-maker. As a child, people recognized his extraordinary intelligence and were impressed by his gentle nature. Anthony was proving himself to be such a promising student that the woman who owned the farm that the family was working on, became his benefactress and financed his schooling. She then paid for his tuition into the ecclesiastical seminary in Genoa.

As he continued his education, his virtue and eloquence as a speaker continued to grow and separated him from the rank of students, thus he was allowed the special privilege of being able to preach while still a sub-deacon. Then when he was just twenty three years old, he was granted a special dispensation to be ordained a priest, two years before reaching the required age of twenty five.

Father Anthony devoted himself fully to his mission as a priest, serving his flock with upmost care, yet, still finding time to continue with his educational work, as well as developing his preaching skills. He worked tirelessly hosting missions and evangelizing… harvesting many souls for the Faith… for Christ. In addition to his missions, he labored at the required duties of a parish priest. Often times spending hours on end in the confessional, wishing to make himself available to the long lines of penitents who flocked to him for spiritual guidance.

In 1838, he was ordained a bishop and appointed to the diocese Bibbio in Italy. He led his diocese by his example of extraordinary virtue, and prudence. He actively worked to restore devotions and lead the faithful with a firm, yet gentle hand. He was widely liked and became known as the “People’s Bishop.”  He was very active, organizing two Synods, while at the same time devoting his time traveling between the parishes in in his diocese. After nine years of serving as bishop, he became very ill  with a high fever.  In 1846, he passed away at the age of 57.