The Unpopular Truth About the Existence of Evil

It seems that over the last couple of years, the Las Vegas Chamber of Commerce has spent quite a bit of money promoting Las Vegas as the ultimate city of sin. “What happens in Vegas, stays in Vegas…” or so we are told, in those flashy commercials that follow ordinary people behaving in a montage of sinful behaviors. With all the glitz and dazzle , they are glamorizing sin as a marketing tool for profit…”Come visit us…you could have the time of your life….’pretend you are someone else’….and no one will ever know your secrets...” It’s quite twisted. Really twisted. But it is true. And people…good people…. spend their money traveling to Vegas to be a part of it all.

“Woe to those who call evil good, and good evil; Who substitute darkness for light and light for darkness; Who substitute bitter for sweet and sweet for bitter!” – Isaiah 5:20

Our moral compasses are so skewed these days we don’t even understand the enormity of the consequences when our choices lead us into sin…into temptation…We have bargained our souls for this false ‘freedom’…This ability to choose our own good…our own ‘what is right’...all the while, denying what is the Truth.

Nothing is free. There is a hefty price to all of this…and that price is evil. It seems that it has come home to roost. It has come to rear it’s ugly head and take with it, anyone who happens to be in the way. Evil is cleaver, and oh so sneaky… it attaches itself to our souls and drags us with it. To the very pits of hell if we let it…believe me…it’s an easy ride… Just a few short decades ago, good and holy Christians wouldn’t even consider supporting a place like Vegas… there was such a stigma attached to it, that God-fearing people avoided it, like the plague.

11 Do not participate in the unfruitful deeds of darkness, but instead even expose them; 12 for it is disgraceful even to speak of the things which are done by them in secret. – Ephesians 5: 11-12

But not any more.

Which leads us to today… so many people are questioning the motives behind the massacre this past Sunday night that left 58 people dead and more than 500 wounded. The images are all over the internet…bodies everywhere… gunned down in such a horrific manner that most people are having a difficult time wrapping their heads around it…it makes no sense….evil never does.

But that doesn’t mean it doesn’t exist. Unfortunately most people have done away with the teachings about evil… and the devil. Even some Christians have gotten away from the teachings of the Bible and the reality of the devil and evil in the world. But as we read in the book of Revelations the devil is real…cast out of heaven to roam the earth here with us… 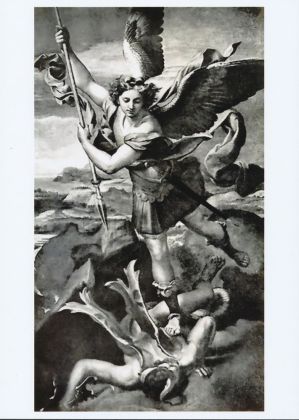 “The huge dragon, the ancient serpent, who is called the Devil and Satan, who deceived the whole world, was thrown down to earth, and its angels were thrown down with it.” –     Book of Revelation 12:9

As faithful Catholics it is precisely at times like these…when the world is spinning in turmoil, that we are called to fulfill our role as the Church Militant…those who are on earth, struggling with temptations, yet still managing to do battle as soldiers of Christ against sin and the devil. As Christians we are called to regularly do spiritual battle with sin and the forces of evil that are running rampant over the earth. God will give us everything we need…but we must rely on Him to clothe us with His armor:

“Be strong in the Lord and in the power of His might. Put on the whole armor of God, that you may be able to stand against the wiles of the devil. For we do not wrestle against flesh and blood, but against principalities, against powers, against the rulers of the darkness of this age, against spiritual hosts of wickedness in the heavenly places.

‘Be sober and vigilant. Your opponent the devil is prowling around like a roaring lion looking for someone to devour.‘ – 1 Peter 5:8

So as we pray for the dead…and for those who are struggling with their losses, let us keep our Rosaries in hand and seek the intercession of the Blessed Mother and St. Michael the Archangel to help us do battle with the evil of the devil.

Like Loading...
This entry was posted in Some thoughts and tagged armor of God, Las Vegas, mass shooting in Las Vegas, sin city, spiritual battle. Bookmark the permalink.