We have all heard the controversy that surrounds the term ‘radical Islamist terrorist’. There are many Muslims who live within the United States and defend their faith as being one of peace, but if one were to review the teachings of Muhammad, and even read the Koran, there is no doubt that his intent was to take over the world for Allah, through force, or Jihad, when necessary. They believe that there is no room for the practice of any other religious beliefs, particularly Christianity. And even though he died at the age of 60, he had already taught his followers well about conquering the world, and turning away from the lessons that other prophets before him had taught. Interestingly enough, he wasn’t widely accepted at first…Which explains why he had to teach his followers to fight so hard…it was his way of ‘convincing’ them of his ‘truth’. So regardless of what you have heard about Muhammad and his teachings, the truth is out there, and it speaks of a violence that is geared towards all who are not Muslim…which takes us back to today’s feast….Our Lady of the Rosary...

For many years Muslims had gained control over several countries, but were ultimately fought back time and time again. Then in the 1500’s the Muslim Turks threatened  Europe again. It was during this time that Michael Ghislieri, a Dominican, was chosen Pope, choosing the name Pius V. The Pope realized the great threat that faced the entire Christian civilization, as the Islamic Turks  were poised to attack Italy and take over all of Europe, which would bring to an end Christianity. He called on all of the European leaders to unite together against the Turkish invasion. But only Venice, Genoa, and Spain answered the papal call. The Christian forces were outnumbered 3 to 2. During the battle Pius V, soon realized that in order to save the Christian civilization, they would have  to have help from above, and invoked the intercession of the Blessed Mother, calling on Christians throughout Europe to pray the Rosary for victory. Then, what looked like a sure disaster suddenly changed. The winds became favorable to the Christian fleet. The Christian forces killed or captured over 70,000 Turks and took only 7,500 causalities. Over 10,000 Christian slaves were released. The victory was theirs, and Europe was saved. According to some accounts, Pope Pius V was granted a miraculous vision, that showed him the Holy League’s victory.

The feast of Our Lady of the Rosary was instituted to honor Mary for the Christian victory over the Turks at Lepanto on October 7, 1571. It was originally called “Our Lady of Victory”, because Pope Pius attributed the victory to the divine intervention of the Blessed Virgin Mary.  In 1573, St. Pius V established the feast, and in 1716, Clement XI extended it to the Universal Church. The Rosary, or the Psalter of the Blessed Virgin Mary, is one of the best prayers invoking the intercession of Mary, the Mother of God. 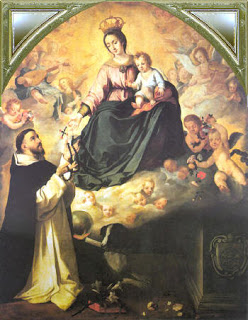 Our Lady of the Rosary, Pray for us.

Like Loading...
This entry was posted in Catholic Feast Days, Patron Saints and tagged 1571, Battle of Lepanto, Holy League, Muslims, Oct. 7, Our Lady of the Rosary, Our lady of Victory, Pope Pius V, Turkish invasion. Bookmark the permalink.