This past Holy Saturday, in the late hours after the world had gone dark, the Church celebrated the Easter Vigil Mass. It is the same every year…it begins outside with the burning of a large fire, which the priest blesses. The fire is then spread to the large Easter candle that the deacon is holding. After some prayers and blessings, the fire is spread to a candle that each of the faithful are holding, following the priest and the deacon who is holding the Easter candle high for all to see, we process into the dark and empty Church… bringing Christ’s Light back into the darkness. And even though it is perhaps the longest  Mass of the entire year, it is by far, one of the most beautiful celebrations of the liturgical year.

Not only is it beautiful because we celebrate Christ’s Resurrection…with all the chants and all the readings…. it is also beautiful because this is the Mass where we Celebrate the Sacraments of Initiation and the Rite of Reception into Full Communion of the Catholic Church for those who have spent the better part of the year preparing to join the Catholic Church in the RCIA program. It is quite beautiful and really inspiring to see that God is still moving mountains and causing human hearts to stir and long for Him in a more deeper union.

It gladdens this heart of mine, because so often we see ‘cradle- Catholics’ who have been to Mass every Sunday for their entire life… Then as adults with families, they ‘keep the faith’… Never straying from their Sunday obligation… Like ‘good Catholics’ they even bring their children with them…Yet all the while, failing to realize…. failing to grasp.… the treasure of the Catholic Church… With protestant-tinted glasses, they fail to see the AWESOME gift of Faith that is only present in the Holy Catholic Church…Falling into the ‘sin’ of the ordinary…they attend Mass, yet they fail to see this ‘Supernatural Gift‘ that is here before us… They fail to understand,  that as Catholics… We have Jesus, Truly Present….His Body, His  Blood, His Soul and His Divinity...Right here…The Risen Lord…(the Triumphant over death!) in the Gift of the Eucharist!.. Somehow, they have lost the Awe of the Lord... They have lost the Awe the God…sadly, they have lost the Awe of Faith….

By making it a point to go to the Easter vigil we are in fact renewing our baptismal vows…renewing our promises to God that we are His… that we are Catholic… and that we will turn away from Satan and all his evil works…all his empty promises…. It is a tangible reminder to us lifers that we have a job to do and God is still there…calling us….each of us… into action.  And besides all that, it is just a wonderful way to witness how God is still in control and using His Holy Catholic Church to call people to Him.  And as faithful followers of Christ, who wish to imitate Him in all things … we really should be there, as family… to welcome them home.

One example of the powerful Way that God  moves in the lives of His converts, we need look no further than the life of one of today’s saints, Saint John Payne, as he was a convert to the Catholic Faith as well. So often when we read about saints, we find that they came from Catholic backgrounds … Born into the Church, as it were. Many of them were raised by devout parents who wished nothing other, than to raise their children to love the Lord…The Catholic Faith played a vital  role in their upbringing. And many of the Church’s  saints had the benefit of a firm foundation in the Faith…but not all of them….

Raised in a Protestant family from England, Saint John Payne was over the age of forty by the time he converted to the True Faith. Having been born around the year 1532, he was living in a time, during which England’s rulers had become very hostile towards the Holy Catholic Church. The King, outright despised the Church and Her power, and like they always say, if you give the devil an inch…he will take a hundred miles... and what had begun as King Henry VIII, trying to get the Church to approve his divorce from his wife, Catherine of Aragon, turned into decades of religious unrest and turmoil in England… causing many in the Church…religious and layman alike to suffer terribly.

In 1574, John entered the College at Douai and on April 7th, 1576, he was ordained a priest. Just a few short weeks later, he left for the English mission. While there he spent most of his time with the widow of Sir William Petre, who was the daughter of Sir William Browne. While with Lady Petre, he pretended that he was merely one of her stewards, but secretly administering the sacraments to the faithful, who still existed…quietly. Often at other times he would also stay with the Lord Mayor of the City of London, in whose house was a ‘priest hole,’ which was a small hidden room where he or another priest could hide.

During this time he was able to help George Godsalve; who had studied at Oxford and had been ordained as a deacon under the reign of the Catholic Queen Mary, but who had fallen back into the errors of Protestantism; reconvert to the Catholic Faith. But before he could witness the ordination of Godsalve, he was arrested and imprisoned in the early part of 1577. Thankfully, he was only to serve a short time and was released by Christmas of 1579, when he was able to return to Ingatestone.

While staying with Lady Petre, he and Godsalve, who by now was a priest as well, were arrested in Warwickshire, England, much through the efforts of the informer or spy, named George Eliot. Eliot, was a known murderer, rapist and thief who made a career out of denouncing Catholics and priests for bounty. He was often referred to as ‘Judas’ Eliot because of his betrayal of Christians. The priests were imprisoned in the Tower of London where they were tortured. Godsalve suffered much, but not nearly as much as Payne. Since Payne was the ‘bigger catch,’ he was forced by Council’s orders,to endure being twice racked. First on August 14th, and then again on October 31st. 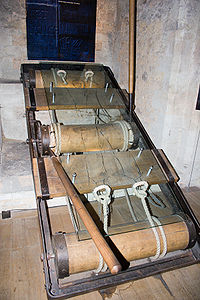 The device used for this ‘racking’ was a torturous machine which stretched the person’s limbs, causing excruciating pain. Often popping could be heard as the bones, ligaments and cartilage of the person being tortured were ripped and destroyed. It was agonizing to say the least….but Saint John Payne was called to endure this punishment…not once, but twice….

The charges that were brought against Payne, were crimes of treason against the Queen. These charges were raised by none other than ‘Judas’ Eliot who was acting out of his anger that the priest had refused to perform a marriage for him earlier.  A short while later, Payne was indicted on the trumped up charges of treason and conspiring to murder the Queen, so as to reinstall Mary, Queen of Scots, to the throne. Of course, Payne wished no such thing, and steadfastly denied all charges, he even affirmed his loyalty to the Queen, in all matters that was lawful for him to do, while still remaining loyal to the Pope. But that didn’t matter… Eliot continued to raise other charges against Payne, all of which, remained unproven, and without any benefit of a fair trial, Father Payne was sentenced to be hanged, drawn and quartered. Receiving his sentence, he calmly commented “If it please the Queen and her Council that I shall die, I refer my cause to God”.
On the morning of April 2nd, 1582, Father Payne was dragged from his cell to the place of execution. There he fell to his knees and prayed for nearly a half and hour. He then kissed the scaffold that was to be used to hang him. He also made a Profession of Faith and declared himself innocent. He was offered a pardon on condition that he conform to the Church of England, and abandon his Faith… but he steadfastly refused.
Fr. Payne was well known in the area and was well liked and admired by many. When he was turned off the ladder, several men from the crowd jumped and grabbed the priests feet, adding weight, so that the priest would die a quicker, less agonizing death. The crowd also prevented the hangman from cutting his body down to quarter him before he had died. Consequently, they  spared him the agony of being drawn and quartered while still alive.

St John Payne was beatified by Pope Leo XIII,  and was one of the group of Catholic Martyrs canonized by Pope Paul VI on 25th, October 1970. They are collectively known as the Forty Martyrs of England and Wales.

As we make our way through this Octave of Easter…Still filled with all the joy of the Risen Lord… and with all of the recent celebrations still fresh in our minds and hearts… let us remember to pray for our newly initiated brothers and sisters in Christ…that they will be ready to defend this great and Holy Institution along with all the Faithful Church Militant here on earth…even if it means facing martyrdom or death. And with that, let us pray:

Dear Lord, Please give us the courage that we need in our day to day struggles… those both big and small alike,  searching out Your Will for us…in all things. And let us also pray that  if we are ever called to wear the red crown of martyrdom, that You may pour Your tender Mercy down upon us, allowing us to be bathe in the blood of Your Holy Saints…these Holy Martyrs… so that we may be able to stand, facing whatever evil befalls us…using our life…our breath…as a testimony to You, God Almighty…Praising You and giving You endless Glory. AMEN.