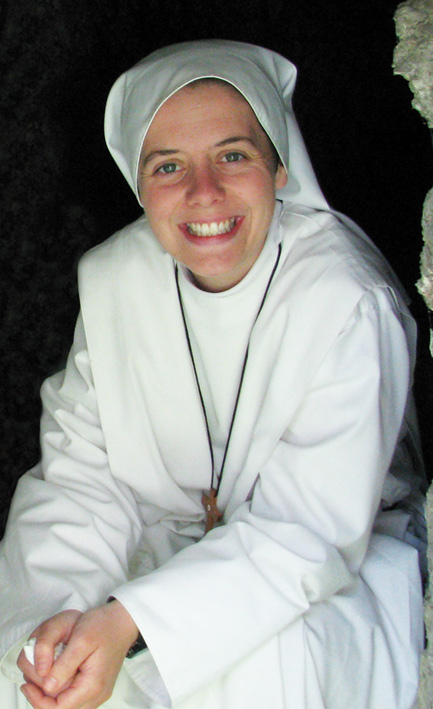 On April 16th in the Holy Mother Church, we celebrated the birthday of Emeritus Pope Benedict XVI, but in small communities of religious and lay members alike, spread  throughout the world, we got together to view the new film “All or Nothing” to remember Sister Clare Crockett who was a Servant Sister of the Home of the Mother, who was killed along with five candidates in an earthquake that struck Playaprieta, Ecuador on April 16th, 2016.

Sister Clare was an amazing servant of God. She had spent several years in Jacksonville before ending up in Ecuador.  Back in October of 2006, when she and the other sisters first arrived in Jacksonville, I was truly amazed at their pure joy. The sisters are clothed in habits that are all white… but the joy that radiated from these beautiful sisters makes them shine from within … with their gentle, charitable natures they are beacons of Christ’s Light…. And even though there is so much focus on Sister Clare and her companions right now, all of the Sisters in the Home radiant this same sort of charism…Under the guidance of Father Raphael Alonso (the founder) and Mother Anna, these young women grow  in their spiritual lives, praying and focusing on God’s Will and His Holy Mother, allowing themselves to be transformed…allowing themselves to embody what it truly means to be a servant of the Lord, and it has truly been a blessing knowing this group of Priests and Sisters alike.

One special blessing, is that my family had the great joy of being one of the families who got to spend time with this sweet and holy Sister. We were a part of the group of lay members that welcomed the Sisters as they moved to Jacksonville Florida and set up a community here. There were four sisters who arrived from Spain. Two of them, Sister Theresa and Sister Ruth were originally from Spain and Sister Clare and Sister Terese  were both originally from Ireland. These were the first group of Sisters to actually live here. Prior to this we had had  opportunities to meet with several of the other sisters as they would have family retreats around town at different parishes before they were actually invited to move here permanently, due in large part from the persistent efforts of Delores Hambleton and the generous nature of Father Fred Parke. The Home of the Mother has 3 missions in the Church: The Defense of the Eucharist, the Defense of the Honor of Our Mother, especially in the privilege of her Virginity, and the Conquest of the Youth for Jesus Christ.

One of my first memories of the Home of the Mother was a family retreat they were holding at Assumption Parish here in Jacksonville. The adults were inside talking and I had wandered outside with my young daughter. I watched as the Brothers of the Home played games out in the field with our sons…they were having a great time. One of my sons was pretty shy at the time and I watched as the Brothers got each of the boys out of  their shells and my son was no different… he was having a blast. I knew right then that I wanted to know more about these religious young men and women who had such an awesome connection with the young people.

To get to know each of the Sisters was totally a wonderful experience…They are called the Home of the Mother…and it actually feels like being at home when you are with them… As part of their evangelization efforts, they hold weekly family meetings to guide and instruct the lay faithful…. They also do a weekly Holy Hour of Adoration with points of meditation and songs. The sisters would always sing, and when Sister Clare was still here, it was special to hear her singing… She had one of the most beautiful voices I have ever heard in my entire life. And to sit in the quite Church, praying and meditating with Our Blessed Lord…and to have Sister Clare’s voice… was a very beautiful memory for me and my family.

The movie documenting her life debuted on the 15th of April, and  is currently being shown in many areas, but even if there is not a showing close to where you live, please click on the teasers on the Home of the Mother website to see more about this wonderful religious order and to read more about Sister Clare Crockett…one of God’s chosen daughters …and I believe...one of God’s holy Saints….

Like Loading...
This entry was posted in Some thoughts and tagged Assumption Parish Jacksonville Florida, Home of the Mother, Sister Clare Crockett. Bookmark the permalink.