Scandal Among the Shepherds 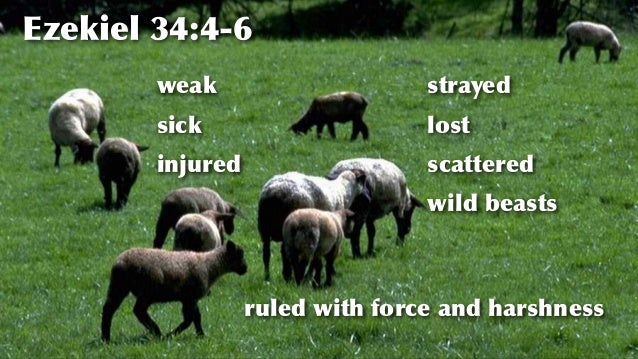 As we entered into the liturgy of the Mass on Wednesday, one could not help but to hear the true prophetic voice speaking to us from the 1st reading from the Book of Ezekiel… chills ran down my spine as it seemed that it could have been written precisely for this time... for these particular days of scandal. It is a harsh message from God, directed to the shepherds of ‘Israel’ who have used their roles as shepherd, not to guide and instruct, but rather to lord over the sheep and to have their fill with them … As the new ‘Israel’, the Catholic Church and Her shepherds; the clergy,  have been found to have fallen into this same sin of old.

Recently, it has been revealed, that many of our Bishops, our Cardinals and priests have failed to shepherd the flocks that were entrusted to them, the very flocks which they had vowed before the Lord to care for, but instead, have abused and neglected. These ‘shepherds’, often acted more like aggressors and not the protectors they promised … with their lives, to be. Much damage has been done. With guilt and shame, many of the abused feel abandoned by the very Faith that should have sustained them … ‘and  the sheep, left defenseless, scattered in the world’…

34 The word of the Lord came to me: 2 “Son of man, prophesy against the shepherds of Israel; prophesy and say to them: ‘This is what the Sovereign Lord says: Woe to you shepherds of Israel who only take care of yourselves! Should not shepherds take care of the flock? 3 You eat the curds, clothe yourselves with the wool and slaughter the choice animals, but you do not take care of the flock. 4 You have not strengthened the weak or healed the sick or bound up the injured. You have not brought back the strays or searched for the lost. You have ruled them harshly and brutally. 5 So they were scattered because there was no shepherd, and when they were scattered they became food for all the wild animals. 6 My sheep wandered over all the mountains and on every high hill. They were scattered over the whole earth, and no one searched or looked for them.

And no matter how bad all of that is… that’s not even all of  it… In addition to the abuse the shepherds inflicted upon the faithful… they also failed to care for the flock that was entrusted to them. Because they failed in their roles to preach the Truth, many others suffered spiritually… falling away from the faith,  without proper guidance, many of them left the Church and they scattered. Unsure of what to believe or who to trust, many of the sheep have been lost to the world and all her sensualities… Many of them have fallen into egregious error, while still others became food for the bellies of the wild beasts that roam about the lands looking to devour their tender flesh…

7 “‘Therefore, you shepherds, hear the word of the Lord: 8 As surely as I live, declares the Sovereign Lord, because my flock lacks a shepherd and so has been plundered and has become food for all the wild animals, and because my shepherds did not search for my flock but cared for themselves rather than for my flock, 9 therefore, you shepherds, hear the word of the Lord: 10 This is what the Sovereign Lord says: I am against the shepherds and will hold them accountable for my flock. I will remove them from tending the flock so that the shepherds can no longer feed themselves. I will rescue my flock from their mouths, and it will no longer be food for them.

But we needn’t fear. Even though it is terrible (the kind of stuff that horror movies are made of...) with so  much damage that has been done, and we ‘the faithful‘ are left, gathering ourselves amidst a landscape marred with shattered innocence and empty carcasses… we know by our Faith, that God is still in control. And we must be strong. As faithful laity, we must pray for our good and holy priests to be faithful and courageous. We must pray for good and holy families to be strong and steadfast in the coming storms. In these trying times, we mustn’t give in to the feelings of anxiety or depression that threaten to overtake us at the sight of the carnage that is being flashed before us. We must not despair...

11 “‘For this is what the Sovereign Lord says: I myself will search for my sheep and look after them. 12 As a shepherd looks after his scattered flock when he is with them, so will I look after my sheep. I will rescue them from all the places where they were scattered on a day of clouds and darkness. 13 I will bring them out from the nations and gather them from the countries, and I will bring them into their own land. I will pasture them on the mountains of Israel, in the ravines and in all the settlements in the land. 14 I will tend them in a good pasture, and the mountain heights of Israel will be their grazing land. There they will lie down in good grazing land, and there they will feed in a rich pasture on the mountains of Israel. 15 I myself will tend my sheep and have them lie down, declares the Sovereign Lord. 16 I will search for the lost and bring back the strays. I will bind up the injured and strengthen the weak, but the sleek and the strong I will destroy. I will shepherd the flock with justice.

It is time to hunker down in prayer,  as all the evil that has been hiding in dark corners gets thrown into the light. It is time to cling to the Promise of God’s Mercy as His Holy Hand flushes out the filth. We must hold true to His Word. And we must be diligent in our prayer life. Diligent in our fasting and the frequency of our use of the sacraments. We must sacrifice ourselves out of our comfort zone, and  unite ourselves under the weight of these sins and make reparations. We must pull on the cloak of humility and follow where the Lord wishes for us to go. And do whatever He asks. We must speak the Truth at all times… and all matters with kindness of heart. There is a charity of Truth that will never be found in lies, no matter how compassionate they may seem.

It looks to be a difficult ride. Those in the world, who wish to see the destruction of the Holy Church, will be at the front of the attack. ‘Destroy the Church,’ they will holler. ‘Destroy the Sacraments,’ they will scream. They will want to see drastic changes made in how the Church holds fast to the sacrament of confession, and the chastity of  Her holy priests. They will say that it is time for a change. They will say that these things only happen when you hold men to such ‘unnatural’ measures of purity. They will blame everyone except those who really are to blame. But we know better. We have been taught the Truth. Sin is still sin. Regardless of what the world says. God’s Holy Word testifies to this. It can all be found in the Words of Holy Scripture. Black and white. Good and evil. Darkness and Light.

This scandal in the Church just goes to prove how unnatural, how vile and evil are the tendencies that lurk in the hearts of sinful men. Men who boast of their power and satisfy their desires with sins of homosexuality, are seeped in this sin. They have had their hearts soiled. They have become shepherds who have lost sight of the Lord and lost the call of their vocation. We need to have compassion, but we mustn’t lose sight of the Truth. We mustn’t allow ourselves to be turned away from the Holiness of the Church… The Bride of Christ on earth… our Mother Church…We are about to be thrown into one of the worst attacks against the Holy Catholic Church in the history of our modern world, one where facts and fictions will be distorted and interchanged to serve the anti- Christ propaganda. The Church must maintain a language of Truth and honesty. We must operate under the banner of the Lord and turn away from all that threatens the Church’s sovereignty. Pray that we will have the strength to hold fast to the Truth, and the courage to proclaim the difference.

The Holy House of God…our Mother Church, has been dirtied with a vile muck and will need a thorough cleaning, scrubbed of all the filth that was allowed to fester in the dark corners, veiled under the cloak of inclusiveness, this scandal was born out of the sins of men acting out their homosexuality. We must move the Church out of the shadows…and be the Light that Christ has called us to be. Each of us...serving the Church…serving the Lord, with humility, obedience and trust.

25 “‘I will make a covenant of peace with them and rid the land of savage beasts so that they may live in the wilderness and sleep in the forests in safety. 26 I will make them and the places surrounding my hill a blessing.[a] I will send down showers in season; there will be showers of blessing. 27 The trees will yield their fruit and the ground will yield its crops; the people will be secure in their land. They will know that I am the Lord, when I break the bars of their yoke and rescue them from the hands of those who enslaved them. 28 They will no longer be plundered by the nations, nor will wild animals devour them. They will live in safety, and no one will make them afraid. 29 I will provide for them a land renowned for its crops, and they will no longer be victims of famine in the land or bear the scorn of the nations. 30 Then they will know that I, the Lord their God, am with them and that they, the Israelites, are my people, declares the Sovereign Lord. 31 You are my sheep, the sheep of my pasture, and I am your God, declares the Sovereign Lord.’”

Like Loading...
This entry was posted in Some thoughts, Uncategorized and tagged Ezekiel 34, holiness, homosexuality, scandal in the Chruch, shepherds, siins of man, suffering. Bookmark the permalink.

1 Response to Scandal Among the Shepherds