The Passion of St. John the Baptist 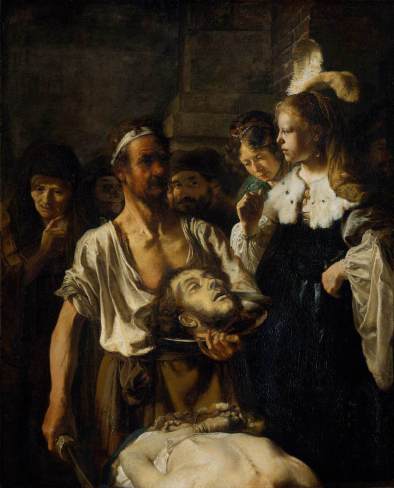 When we say the ‘Passion of St, John the Baptist’… Just what does this mean?… Well, the word passion is actually derived from the Latin word ‘patior’ which means to suffer. It is often the word associated with Christ’s suffering and death on Good Friday. Much like Christ who suffered at the hands of his tormentors, St. John the Baptist suffered in a similar, although  ‘smaller’ way. St. John the Baptist’s death was a precursor of what was to happen to Christ… it was not only to prepare… but to point the way to Christ as well.

How fitting then, that we should examine the ‘Passion’ of St. John, during this period of upheaval in the Church, an upheaval brought about because holy men have abandoned the Truth to follow after their disordered passions. And as a result, they have lost their capacity to recognize the evil that lines the path they are traveling on. They have allowed their passions to corrupt their souls… they have abandoned their vocation as shepherds, and they have become the very wolves they promised to protect us from.

The Passion of St. John the Baptist reminds us that we must adhere to the Truth of Christ in our daily lives. It also reminds us, just how destructive these disordered inclinations can be to the sanctity of our souls. We must remember that a disordered inclination includes all of those things in our lives that we feel drawn to…even though they go against the laws of God... regardless of how good it feels… or how much satisfaction we may gain from it.

It is precisely these types of disorders that St. John the Baptist preached against. He understood that he must speak the Truth in all matters… even if it meant that he would be punished … even if it meant his death…  As a prophet of the Lord he had an obligation to speak the Truth… And as disciples of Christ, these same obligations apply to us today. Many of us who refer to ourselves as Christians are afraid to rock the boat… in the hostile environment of our present day, I’m afraid that many of us never speak up because we are afraid of what we might lose.

We are afraid that the world will mark us as crazy or even fanatical. But we must remember that “Our work is for God, not man” (Galations1:10) So what does it matter what people think? Remember the baker who refused to bake a cake for same sex marriage?  Of course we remember, it was devastating…  In a world that wants nothing more that to silence Christ’s message, speaking out is bad for business. Many of us keep our mouths shut because we don’t want the extra press… We need our jobs and we need to put food on the table…. We don’t want to live on locusts and honey… Many of us just  aren’t prepared to enter the ring as a full combatant in this fight with the devil. We’d rather turn the other way and hope the evil just moves on by without taking us with it.

Another reason many fail to speak up is that we have been conditioned to think that we need to keep our mouth shut. We have been told that somehow speaking the Truth is wrong… that it is evil. The secular society teaches us  that we shouldn’t judge… heck even Pope Francis mimics that message!  As  Christians we  are encouraged to follow the straight and narrow but then we are told not to judge… we are encouraged to blur the lines between Truth and lies… to blur the lines between dark and Light. But regardless of our excuses.. this is no way to live our lives…

As Christians we are all called to follow St. John the Baptist’s great example of living for God. The Passion of St. John the Baptist tells the story of a great prophet who spoke only the Truth. He was a prophet who separated himself from the clutches of the world and all her empty promises and possessions. He lived simply… he lived humbly. He was a hermit in the desert, eating only what was needed to survive, spreading God’s message everywhere… especially where it wasn’t wanted. He preached and he taught any one who would listen about the coming Messiah. He held himself in no esteem and realized that his life was as a man, who owed everything  he had, to God. Ironically, he was martyred by the hands of a drunken king who held himself in great esteem and allowed himself to be ruled by his lust and his pride, a man who was so attached  to the world and her riches, that he forgot he was in a fact a child of this same God… Just like St. John the Baptist.

As we contemplate this special saint and his passion, we should pause to pray and meditate upon our own mission… upon our own passions. We need to ask ourselves, ‘What do we allow to guide our hearts… to guide our souls?’ Are we pointing the way to the Lord? Are we humble or are we holding ourselves in high esteem like King Herod, allowing ourselves to fall away from the grace of the Lord? Are we praying for our priests… that they remain pure and holy? Are we using our voices to point to the Truth? If we think that someone else will enter this battle on our account, we need to reconsider our priorities. And just like St. John the Baptist preached, we must realize that we must repent, for the Kingdom of God is at hand.

Like Loading...
This entry was posted in Catholic Feast Days, Patron Saints and tagged Passion of St. John the Baptist, passions of men, sin, the Way of Christ. Bookmark the permalink.