34 When Jesus landed and saw a large crowd, he had compassion on them, because they were like sheep without a shepherd. So he began teaching them many things.

35 By this time it was late in the day, so his disciples came to him. “This is a remote place,” they said, “and it’s already very late. 36 Send the people away so that they can go to the surrounding countryside and villages and buy themselves something to eat.”

37 But he answered, “You give them something to eat.”

They said to him, “That would take more than half a year’s wages[a]! Are we to go and spend that much on bread and give it to them to eat?”

When they found out, they said, “Five—and two fish.”

39 Then Jesus directed them to have all the people sit down in groups on the green grass. 40 So they sat down in groups of hundreds and fifties. 41 Taking the five loaves and the two fish and looking up to heaven, he gave thanks and broke the loaves. Then he gave them to his disciples to distribute to the people. He also divided the two fish among them all. 42 They all ate and were satisfied, 43 and the disciples picked up twelve basketfuls of broken pieces of bread and fish. 44 The number of the men who had eaten was five thousand.- Mark 6 : 34-44 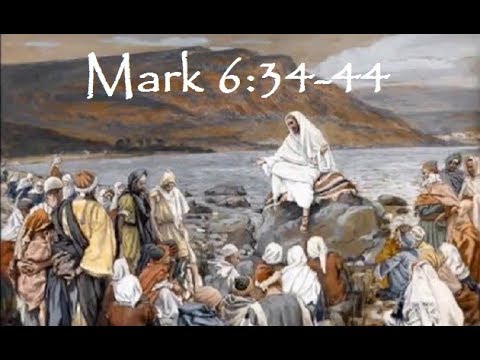 Today’s Gospel reading is one we have heard many times, the miracle appears in all four gospels, with the telling varying only slightly, but the message remaining the same. Jesus has just reached the shore and sees the large gathering of people, and when He sees the vast crowds, His heart is moved to pity for them. His heart…His Sacred Heart is filled with compassion for those He encounters. He teaches them and offers them spiritual guidance….Then when His disciples realize how late it is and try to get Jesus to disperse the crowds so they can fetch their own foods, again Jesus teaches them, as well as us, by responding with compassion and care for all that have gathered. He is moved with compassion for them. Do you see?

Even though this passage shows us, or rather, prefigures the multiplication of the Eucharist, it is also a beautiful teaching on compassion. How often in our daily lives do we encounter those who don’t ‘deserve‘ anything from us, especially our compassion? Heck,in our minds, most people we encounter don’t even warrant the meager effort it takes to smile...

I am not suggesting that we have to go out into the crux of battlefield, the world is full of violent crazy men and it can be a dangerous place, but what I am sayng is that perhaps when we encounter these crowds of people….or these individuals, especially those within our own family, instead of looking at them with disguist or anger…. perhaps dear reader, we may remember Christ’s attitude when He arrived on shore, after having just left another large group. He had just gathered His disciples telling them, “Come with me by yourselves to a quiet place and get some rest.”(Mark 6:31)  As He encounters this massive crowd, He was not planning on speaking again. It wasn’t the right time....and He could have stepped back onto the boat and dissappeared further down the shore. He could have even approached them with anger, dispersing them back to their homelands….He could have done so many other things…. but He didn’t. He looked upon them with compassion and took pity on them. Perhaps, as this year begins we should pray for the grace that when confronted with someone who tends to try our patience that with God’s help and the Blessed Mother’s inspiration, we may do the same. Ad Maiorem Dei gloriam!